Another fine mess I got me into!

So it was a new experience to add to the litany of near disasters last week. But I am getting rather nifty at pulling a weird kind of success out of the jaws of despair. It was the end of a very long and tiring month that started in Bristol, finished in Wishaw and seemed to be everywhere in between. Writing events all over the place, Penguin’s PR having difficulty spelling my name right. At work some members of staff were breaking limbs or being caught up in the French traffic controllers’ strike. Nobody was where they should have been, or doing what they supposed to be doing. Me included. 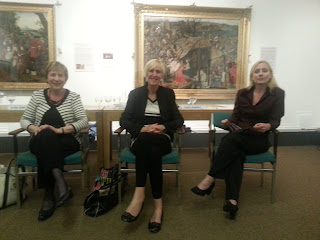 And I was trying my hand - my single hand - at a kind of stand up type gig at Cottiers Theatre as part of the West End Festival.  It wasn't a big audience. Indeed, I am sure that only four of them were my audience, most of them were just sitting  enjoying their drinks after the folk band had finished, soaking up the ambiance when this mad blonde climbed up on the stage and started talking about serial killing...
But they stayed and listened, and laughed and bought books. 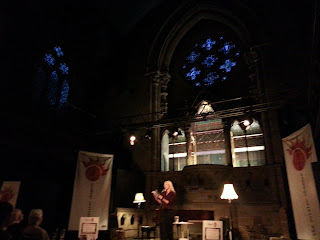 I was tired, even more than usual due to extra hours at work and the fat free diet now being in week ten ... Feeling ok with that but before the gig PR mad Moira (the local PR who CAN spell my name right) and Lord Lushfield (my personal photographer!)) hurried over from the Chris Brookmyre, Mark Billingham gig and then realised they hadn't had anything to eat. So they sat in front of me (baked potato, no cheese, no butter, just a green salad no dressing thank you, yes that’s fine), munching their way through a fish and chip platter with extra side salad drizzling in vinegar and olive oil dressing... the smell of the batter wafting its way across the table to my nostrils... my thoughts really did turn to serial killing.

Cottiers is a fantastic venue, I hope that they really get the literary events onto the West End Festival map... they will miss out if they don't. I can see a great event in there next year, me, Alex, Craig and Michael Malone fighting over the chips.... what could be better.

Reading Gordon Brown Catalyst, very different from his other two books. It feels like he has settled into his voice with this one. A great book!
Posted by Caro Ramsay at 11:03 No comments: 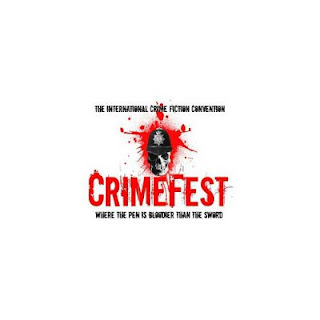 Well the serial killing panel went really well, I thought you might be interested to see the notes I had in front  of me.... 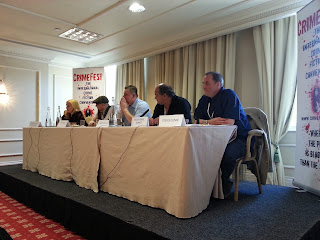 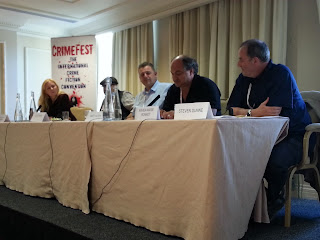 Hi, welcome, thank you for attending and not being too desperate to get to the bar.

Our topic is serial killers.. why do we love them?

The most common definition, the 'gold standard',  used in the UK is a killer with three or more victims  in a period of not less than 30 days.... with the  slight caveat that there should be no connection between the victims apart from the person who brought about their demise. So if you kill every  member of your family over a ten year period you might inherit their dosh but you will not get the serial killer  'blue peter' badge.

So on this deadliest of topic, I have four lovely and scary men... 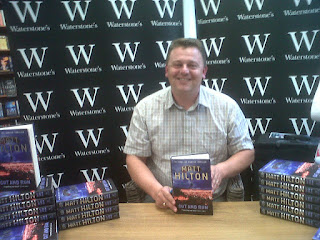 I'm sure Matt Hilton needs no introduction, creator of the fantastic Joe Hunter novels. In Blood  and Ashes, I stopped counting the bodies at 38..... and  they were all killed by the hero!    But he saves the cat....'The pace rattles along with the intensity of a disgruntled rattlesnake.' 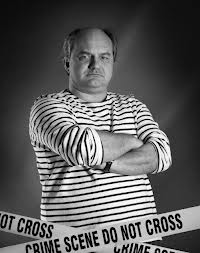 Xavier Marie Bonnot,  a new author to me and a very pleasing discovery, very academic sophisticated crime thrillers...then somebody gets an arrow through the head.  Gripping fast paced and intelligent. The protagonist, Michel De Palma has been compared to Harry Bosch but I thought he was more like Morse... but with much better luck with the ladies.... 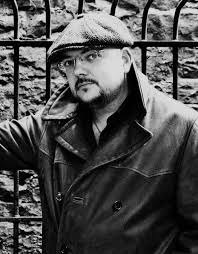 David Marks.  His first novel Dark Winter a Richard and Judy pick, and followed by the best seller Original Skin. And he has a totally original detective, Aector McAvoy. The big friendly giant of crime fiction. 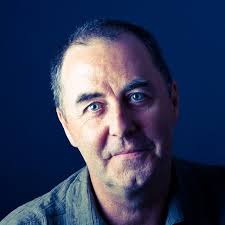 And indeed, another original detective is  Damon Brook, written by the scariest person on the panel ... Steve Dunn,  writer of The Deity  The Reaper and The Disciple. The Deity has one of the most unsettling first chapters I have ever read. His writing has often been  compared to that of  Thomas Harris.

Have any of you met any real serial killers?  Xavier told us that he had filmed a documentary about a French serial killer, interviewing him in prison many times. He was deeply manipulative, Xavier admitted he had to keep reminding himself that this man had killed seven children.

Now interestingly Scotland has produced  more serial killers per capita than any other country in the developed world (United Nations). Scotland also has the highest percentage 40% , of the population carrying the melocortin 1 receptor gene (the recessive gene for being a redhead)
We had a bit of light hearted banter about that - one of the panel had a redheaded wife, I have a redhead for both agent and editor- we were on dangerous ground.

Looking around,  films from  1974 to 2006 about serial killers were typically somebody killing a lot of other people and somebody trying to catch them. But from 2006 onward for every traditional one there is another where the serial killer is the avenger of a greater atrocity....
We chatted about this for a while... the Dexter effect... indeed all of us on the panel had a baddie who was in some ways  more worthy than the victims.

Which serial killer - real or fictional - would you like to invite for dinner, a 'come die with me...' I choose  Jack The Ripper so I could make a fortune by writing the story of his life. Then maybe Harold Shipman... as many thought he was a good doctor, a kind and decent man until the truth came out. A real Jekyll and Hyde. Inviting Ted Bundy round seemed to be popular... just to ask him... why?

And if psychological  profiling was a load of tosh!

I never did get round to asking who would win in a fight between Joe Hunter and Jack Reacher? 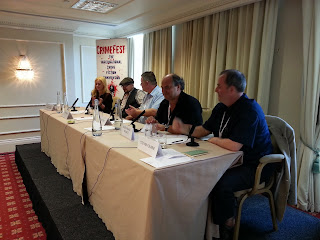