As the advert says ,'I should have gone to Iceland'.
But instead I went to San Diego to look at the zoo.
And it took us 50 hours to get home.
The super duper Dreamliner aircraft with its high spec non jet lag cabin pressure, its electric windows ( darkening not opening) and state of the art in flight entertainment system is a fab plane. So new, it sat on the runway in its wrapper.
It is the most fuel efficient plane ever manufactured.
Because it doesn't actually fly.
It sits on the ground and looks pretty.

The plane we eventually got in (three airports later) had a special  turbulence seeking feature.
The luggage is making its way to Scotland by independent means.
Like I said, should have gone to Iceland.
So here is a blog from a free wheeling jet lagged mind, 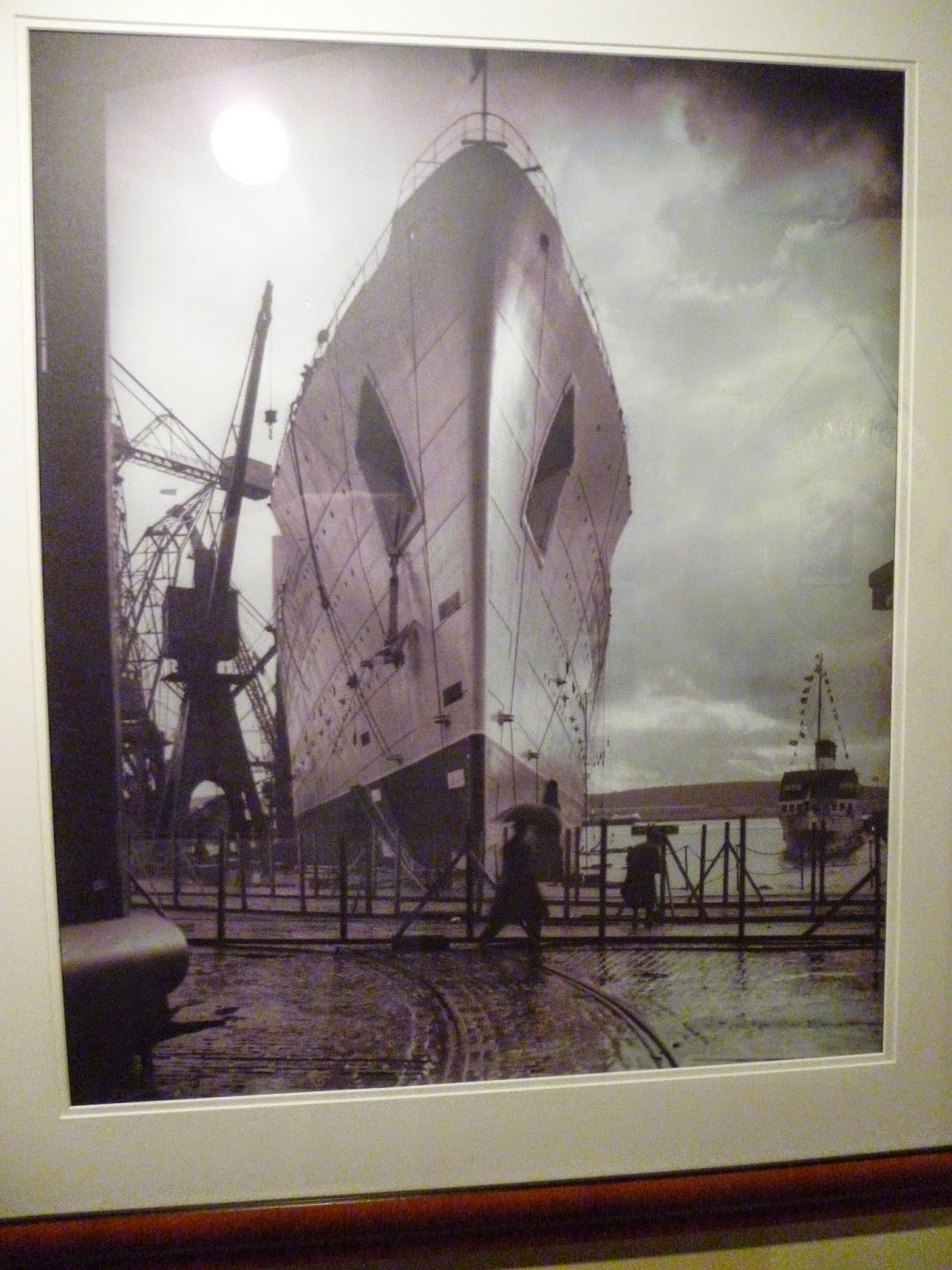 I'm from the part of Glasgow right on the Clyde (well all of Glasgow is on the the Clyde but you get my drift)
My Grandad , as a very young man, riveted bits of the Queen Mary together. My mum, years later worked for the computer that made her valves, all the aunts and uncles worked in shipbuilding somewhere. My dad designed some of the cranes that Browns, Kvaerner, Clyde Ship Builders ordered. Most of them are still in operation.
In China.
So this was  my favourite picture of the QM. Still on the Clydeside. If that ship could think, she's ruminating on her retirement, wishing for the good weather of Long Beach!
See the wee guy in the foreground, umbrella, running to get out the rain. 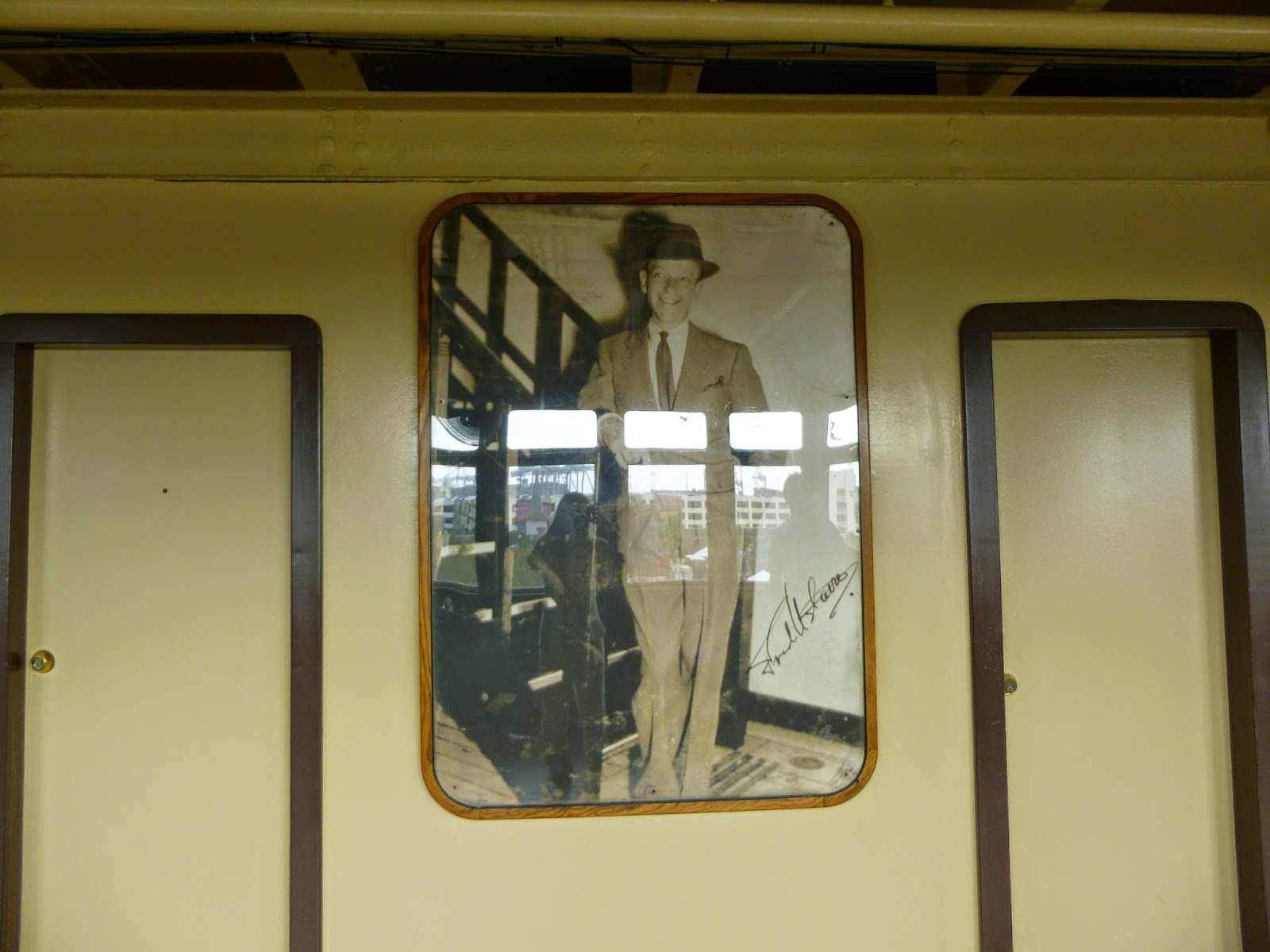 Fred Astaire was a famous passenger. 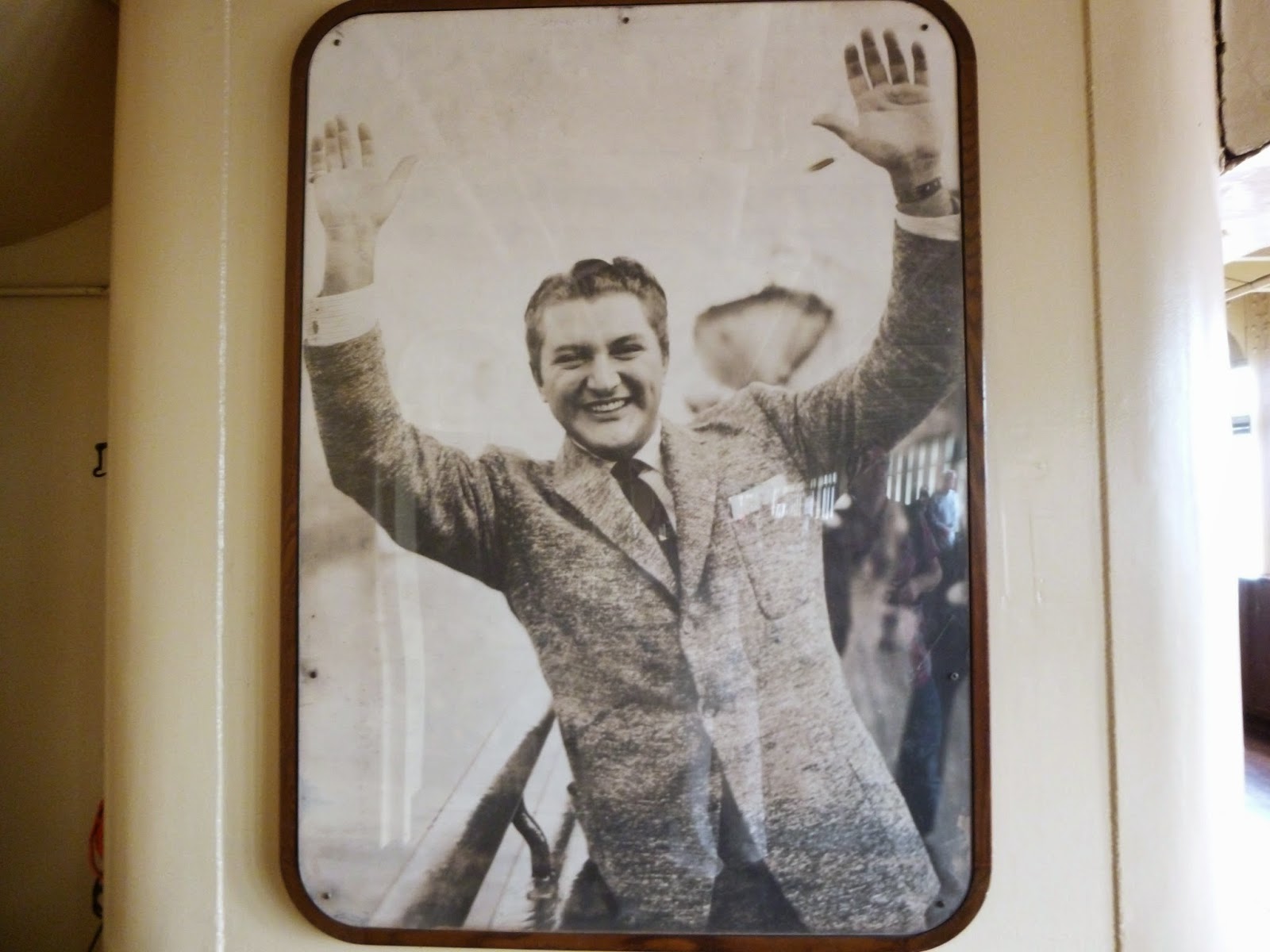 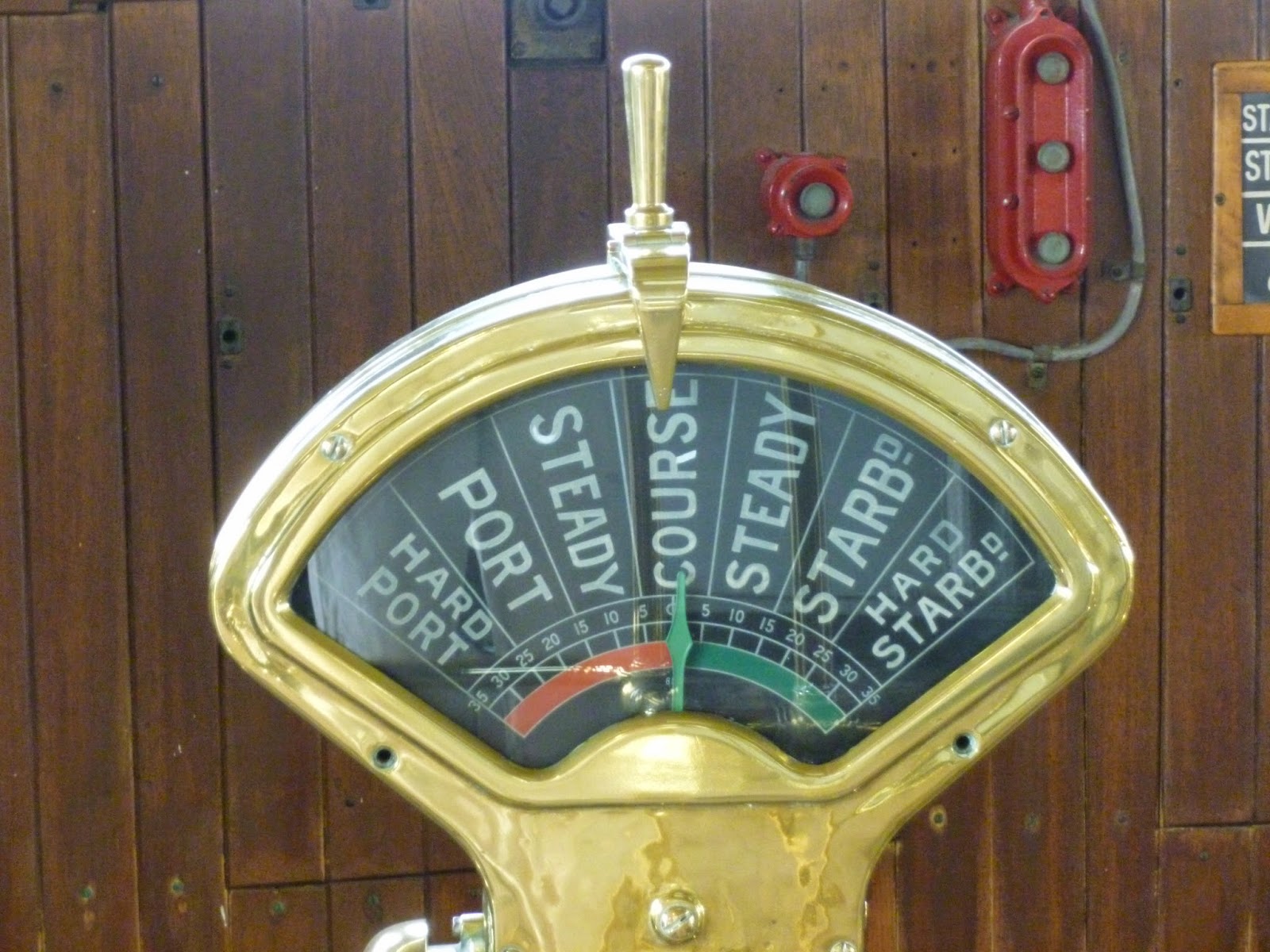 Yip, I had a shot in a Captain Kirk kind of way.
Full steam ahead Scotty, 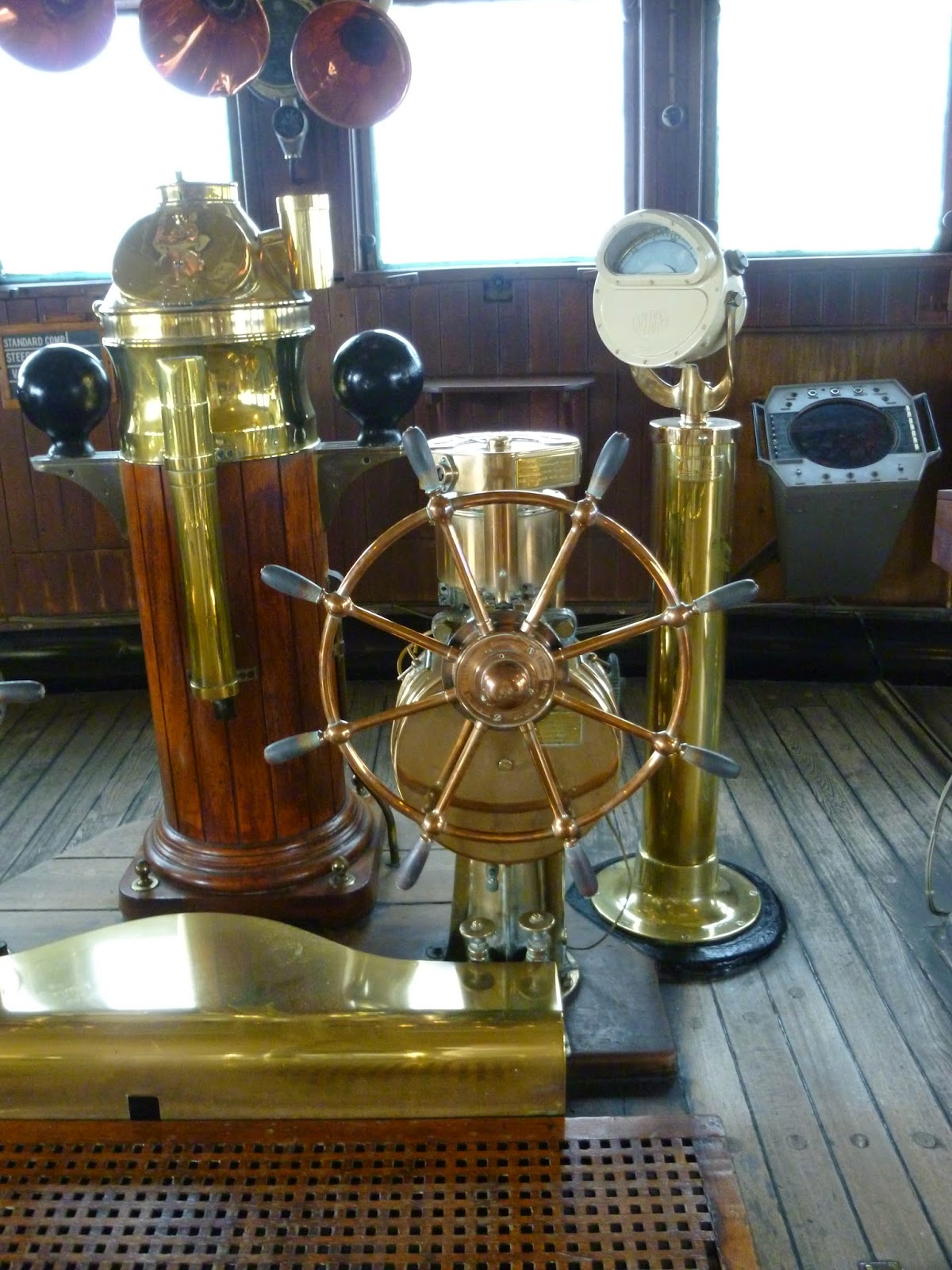 Oh No captain, the engines canny take it 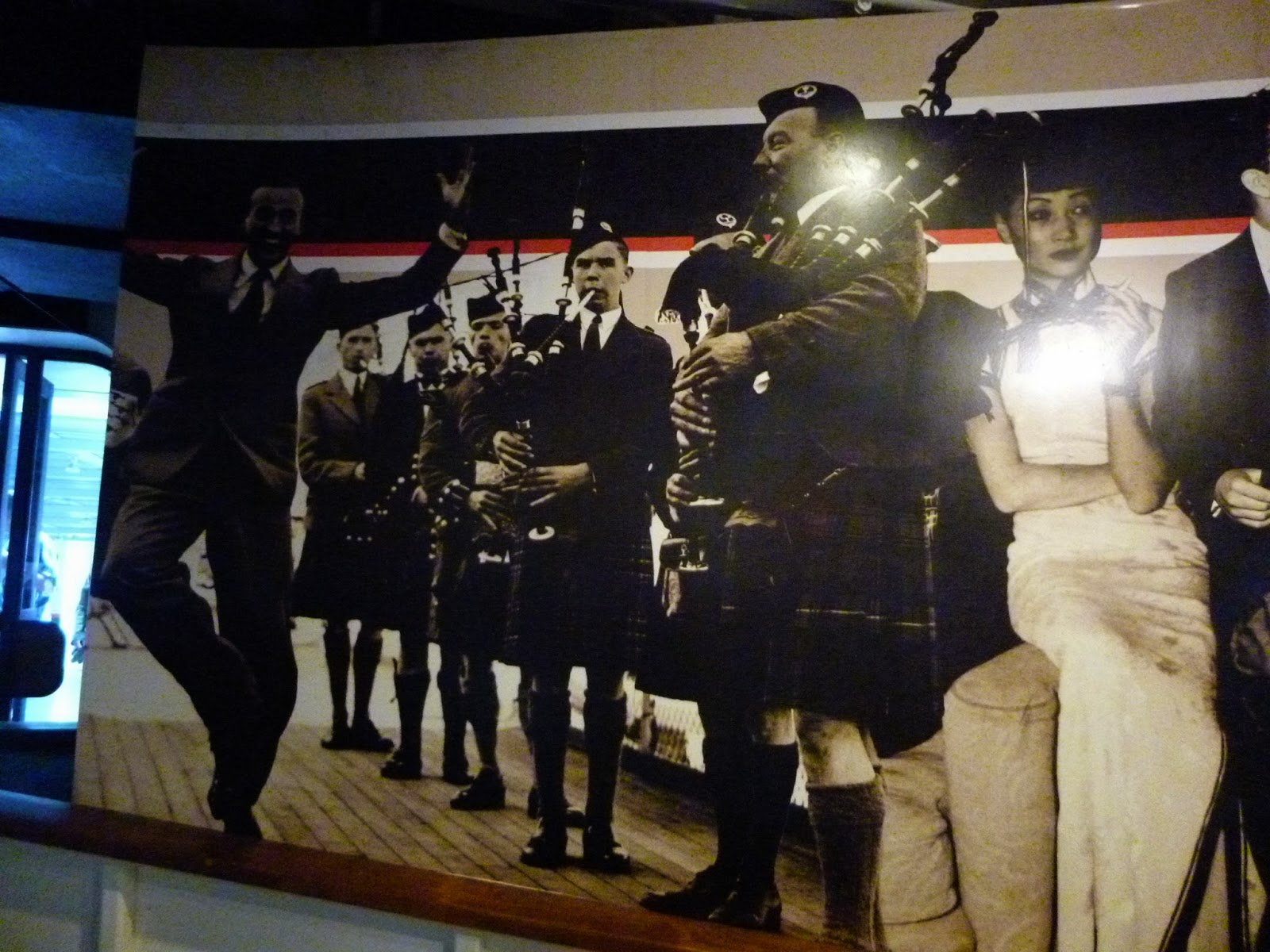 Then for some reason there was a picture of David Niven doing a Highland fling.

During the war, she was painted grey, and became known as the 'Grey Ghost'. The exhibition at her current Loch Beach site naturally emphasises the heroism and the gallantry of  sailings where  16500 men crammed onto a boat built to hold 2000 passengers and 1000 crew. I've been told since that there were many fatalities from overcrowding, some from of crush injury  due to so many being in such a confined space.  That might be anecdotal, the actual reports still seem to be classified.. 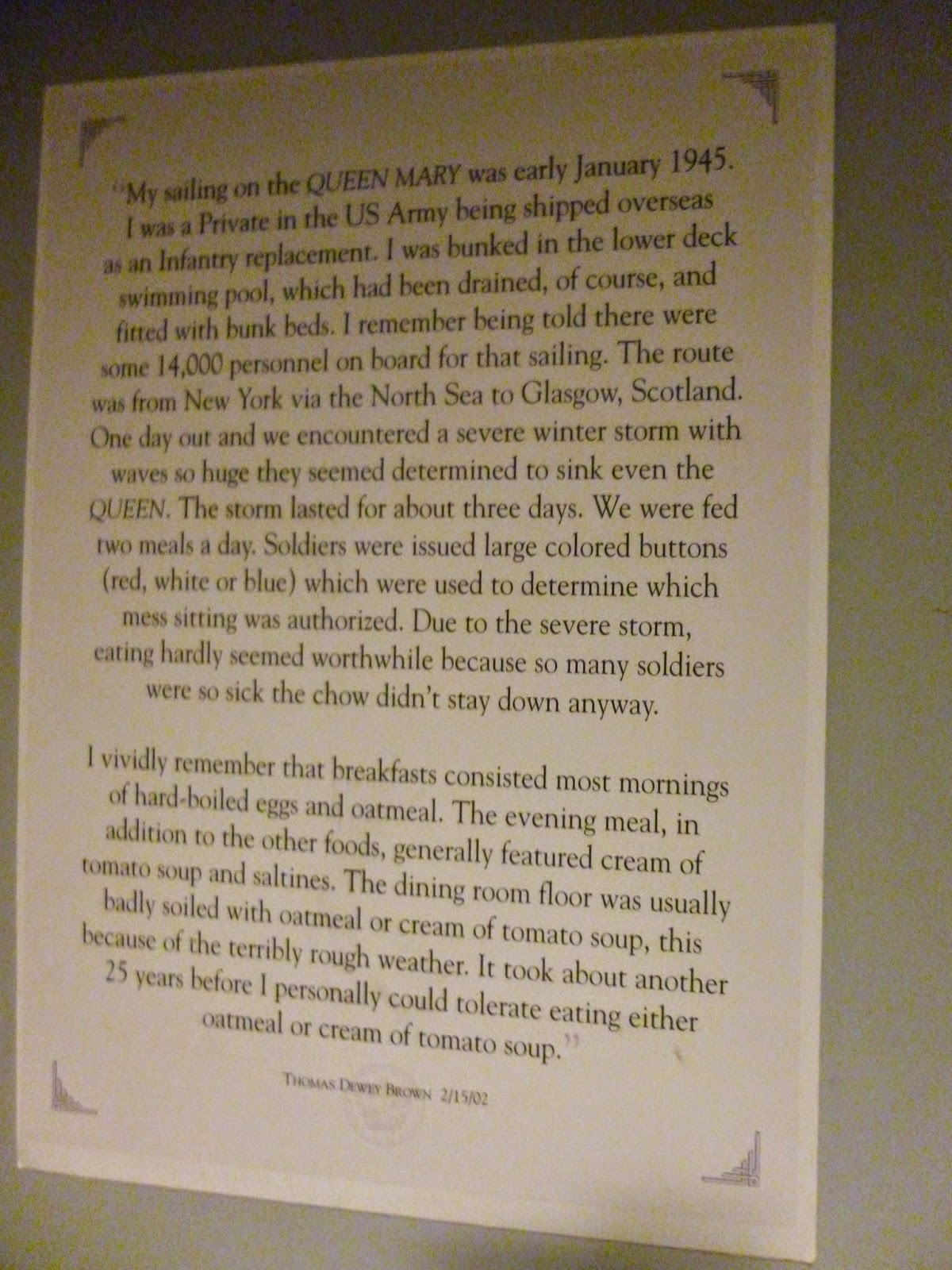 This report of a soldier on board talks about being more afraid of the Scottish weather than the enemy submarines.  The QM was rigged with a degaussing coil to prevent magnetic mines. She zigged zagged her way to make her difficult to track and her sheer speed made her difficult to pursue. 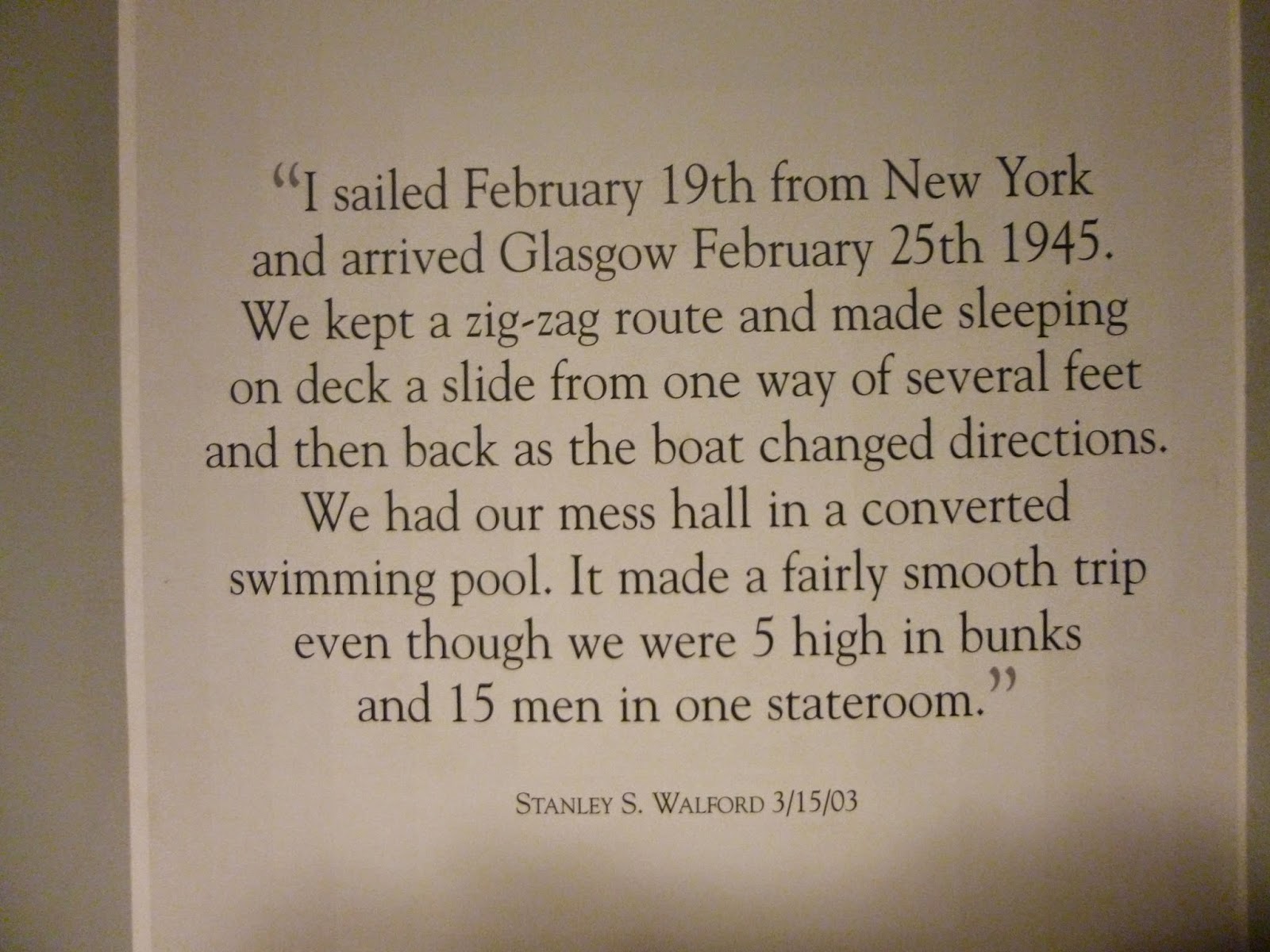 One night, off the coast of Scotland, she was hit by a rogue wave
That was December 1942, She had 16,082 American soldiers on board. which still stands as a record for most passengers transported on one vessel.
She had sailed 700 miles of the New York to GB trip when the wave hit.. It was 28 metres high, and went onto her broad side. The ship rolled 52 degrees. Three more and she would have been over.
A writer chappie called Paul Gallico  read about it many years later and wrote a book inspired by it.
The Poseidon Adventure 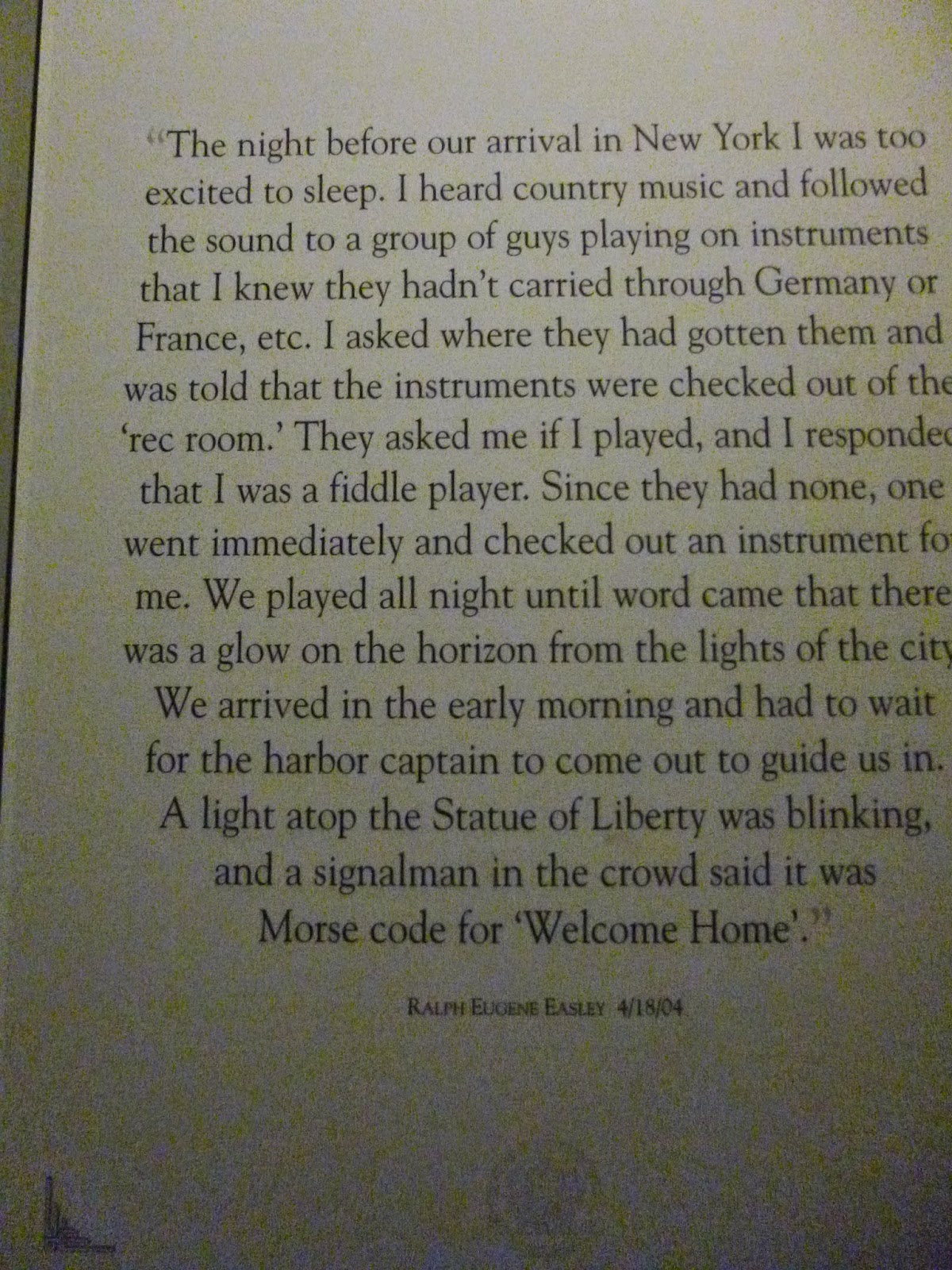 This does bring tears to the eye. After all that horror of war, the QM sailing into New York in the darkness. Grey painted, you can imagine her almost invisible in the night air - then they see the Statue of Liberty  lights flashing 'Welcome home' in Morse code. 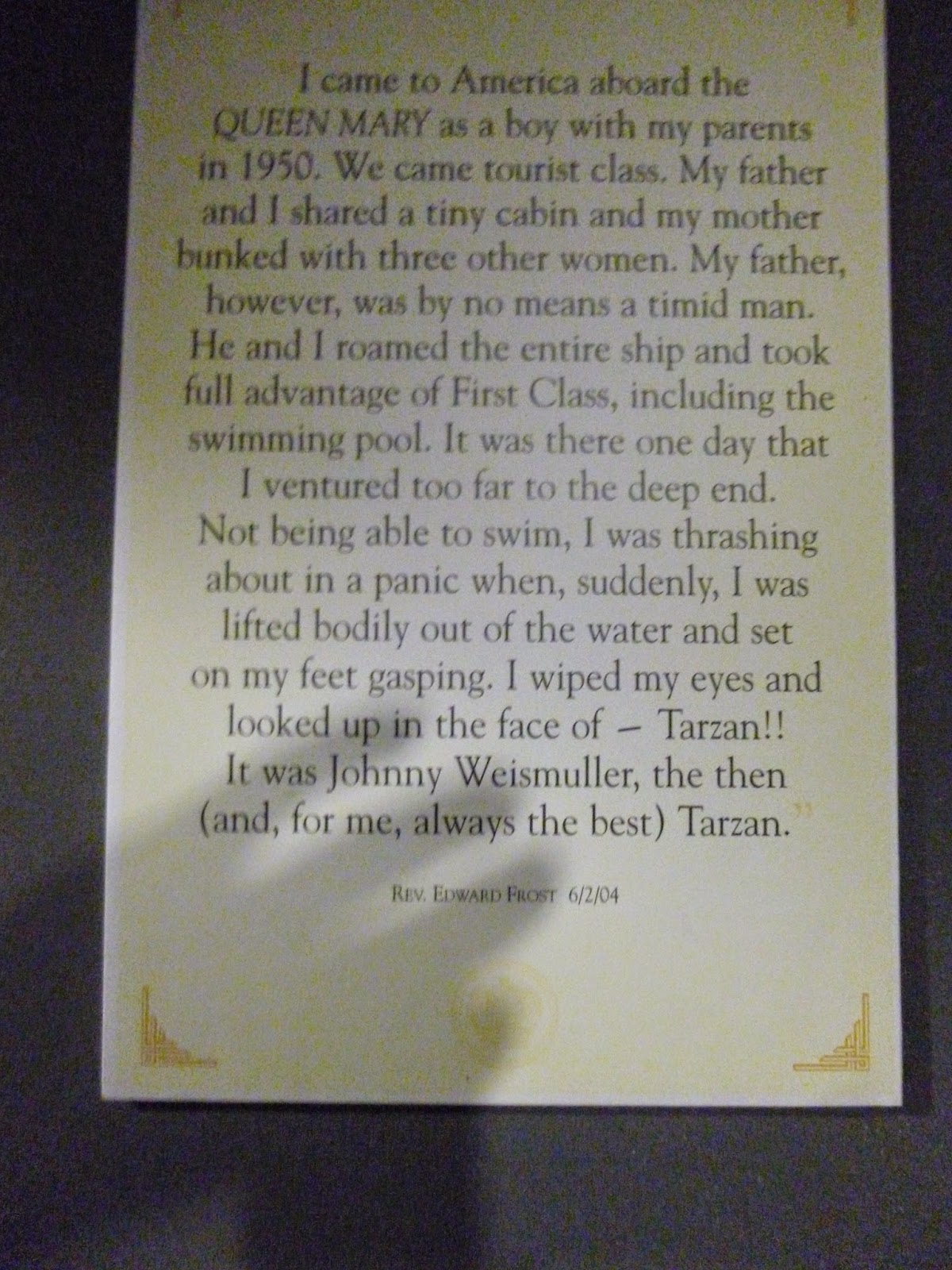 But this was my favourite story. A young boy, a third class passenger, got into a bit of trouble in the swimming pool and was rescued by - Johnny Weissmuller! 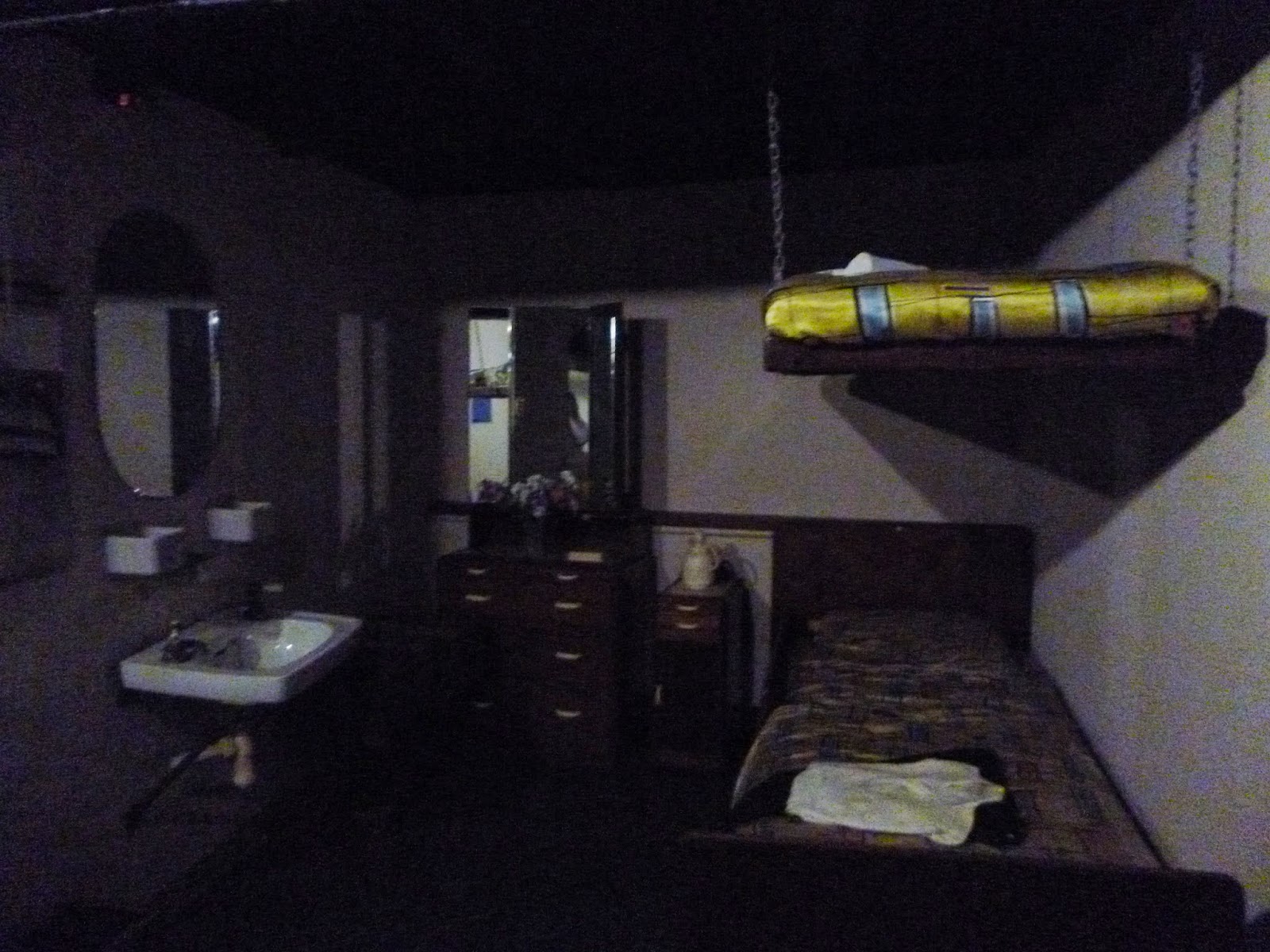 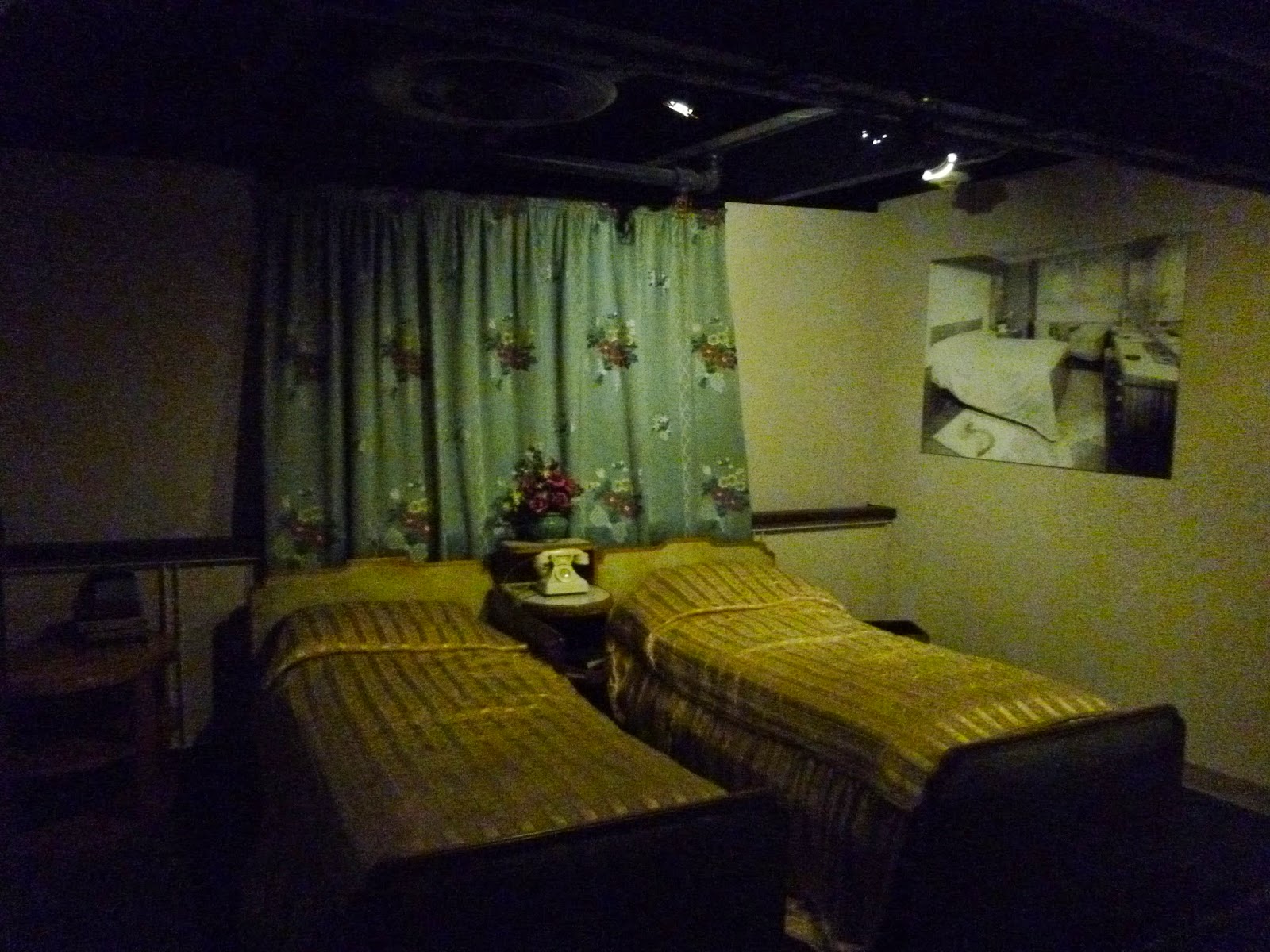 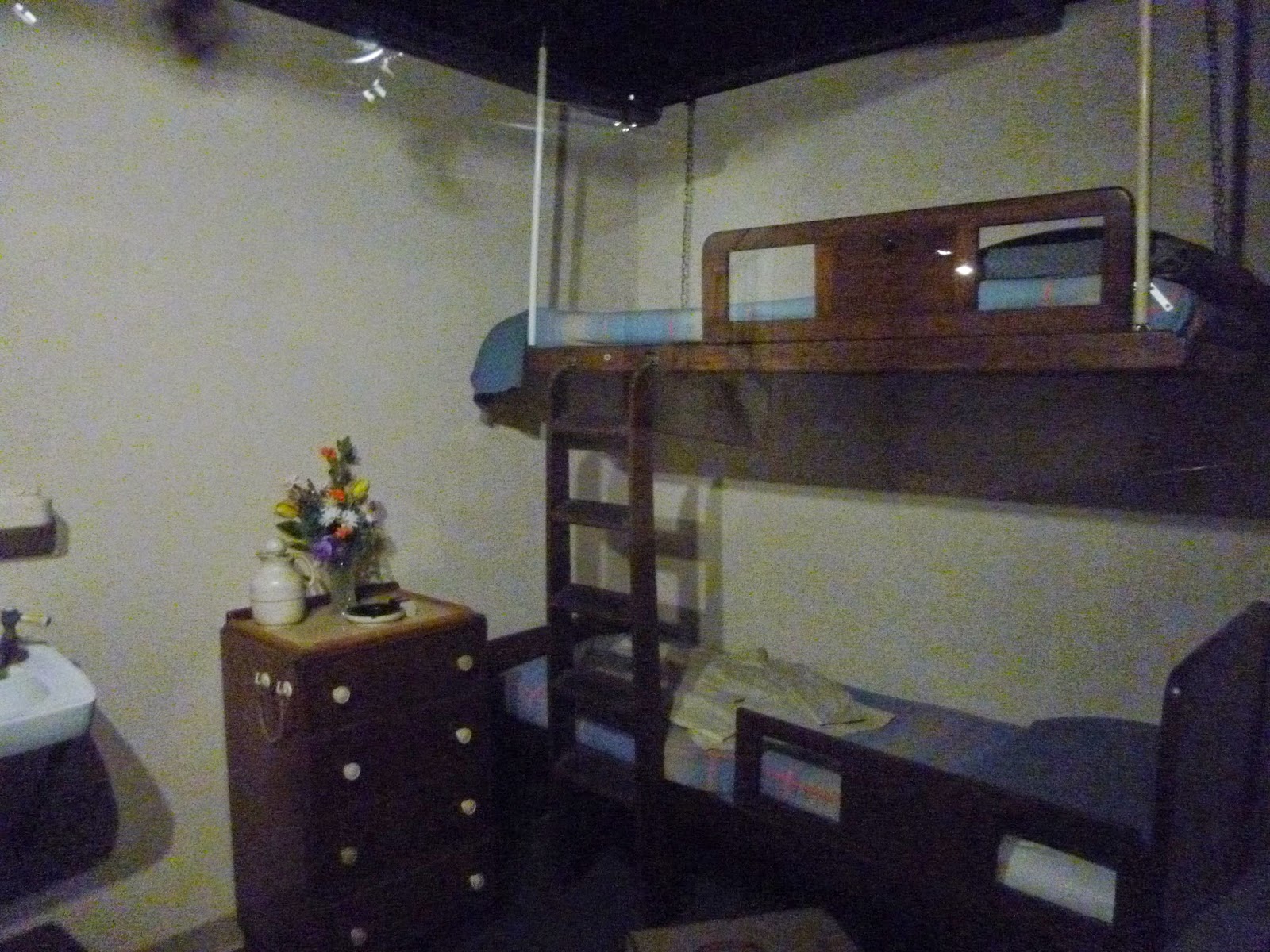 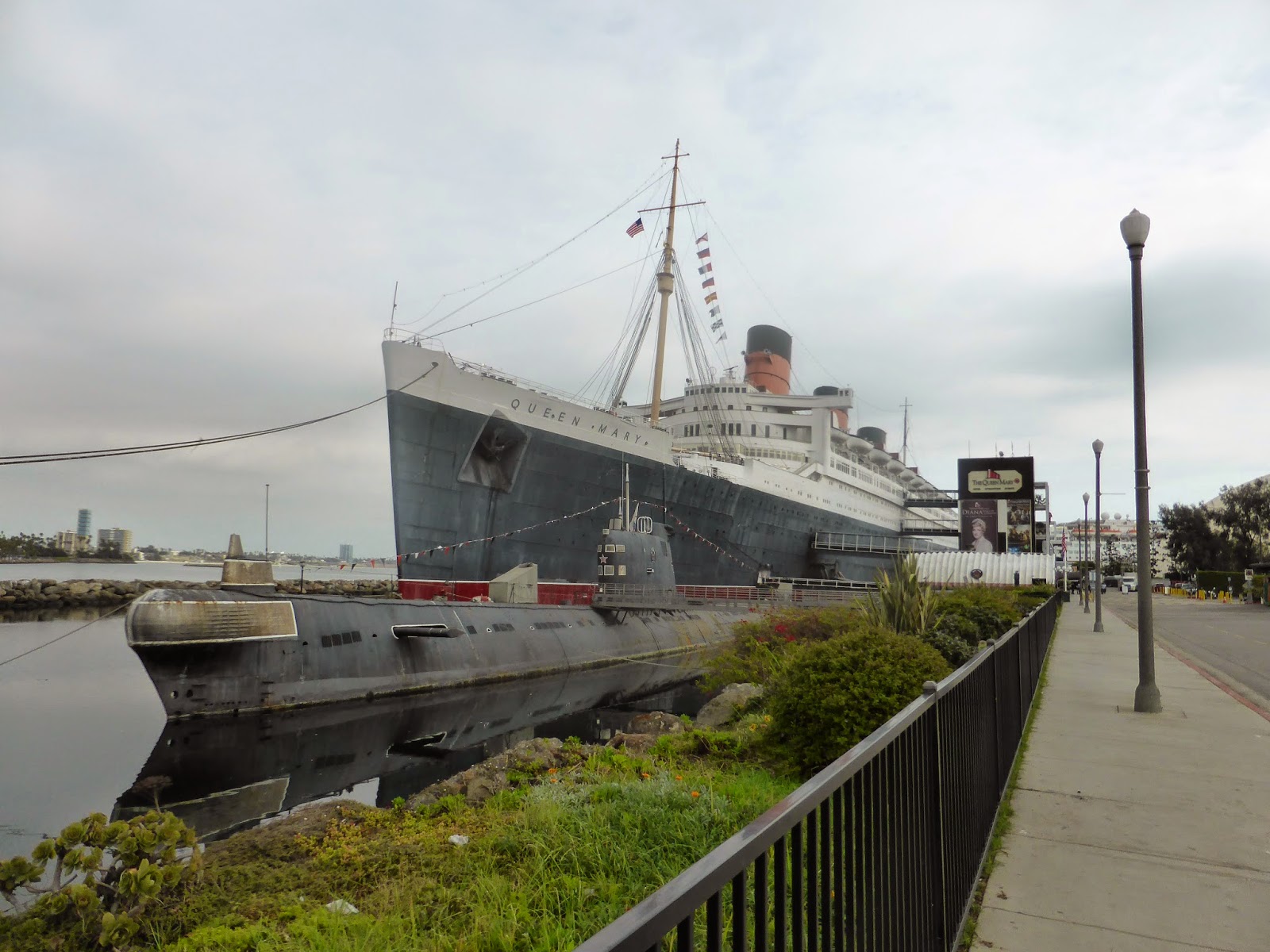 Enjoying the sun in her retirement.
When these boats were launched the bow wave caused havoc down the Clyde into Renfrew and beyond. It  flooded everywhere. Kids ( of all ages - my grandparents included ) used to climb on high things on the day. They  leaned out of windows of upstairs neighbours in the tenements and enjoyed every minute of the chaos. Much of the old cine film of these launches is on U tube and worth viewing.
I've read that 18 drag chains acted as the breaks in the QM  and they had to widen the river to give her more of a diagonal to cross on at her launch - otherwise they feared she would ram the riverside further down. 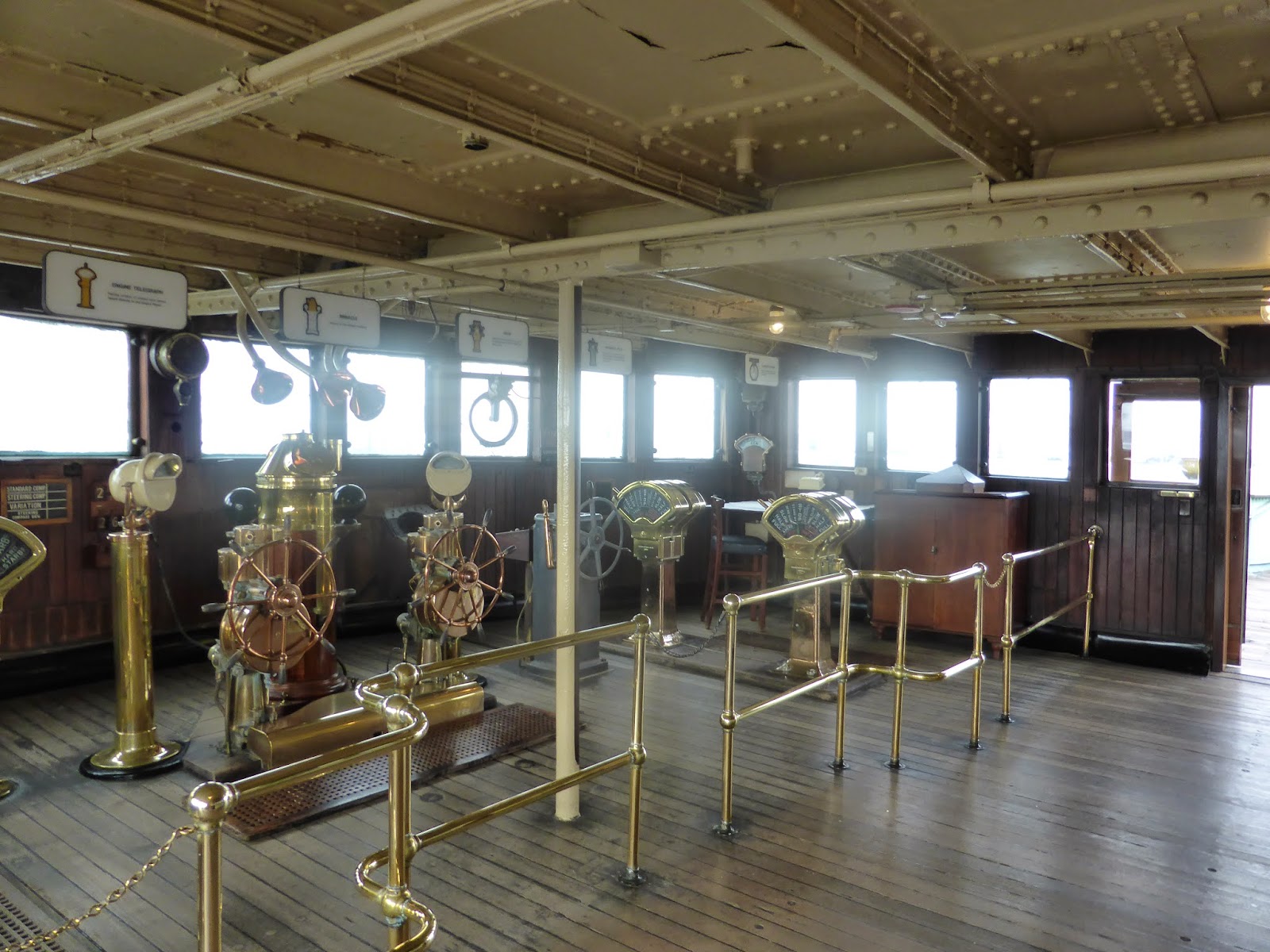 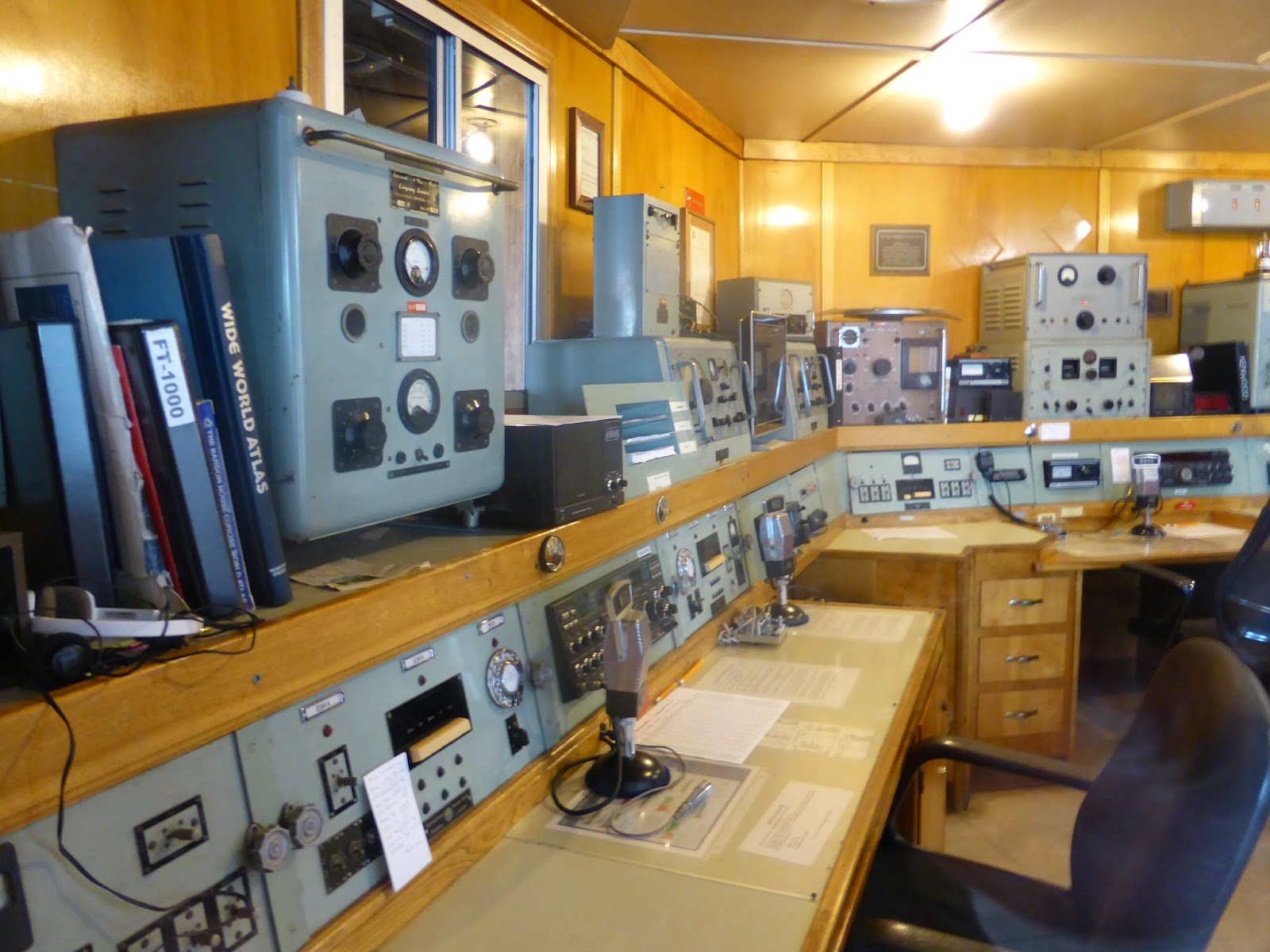 The radio room with radio sets from different eras. 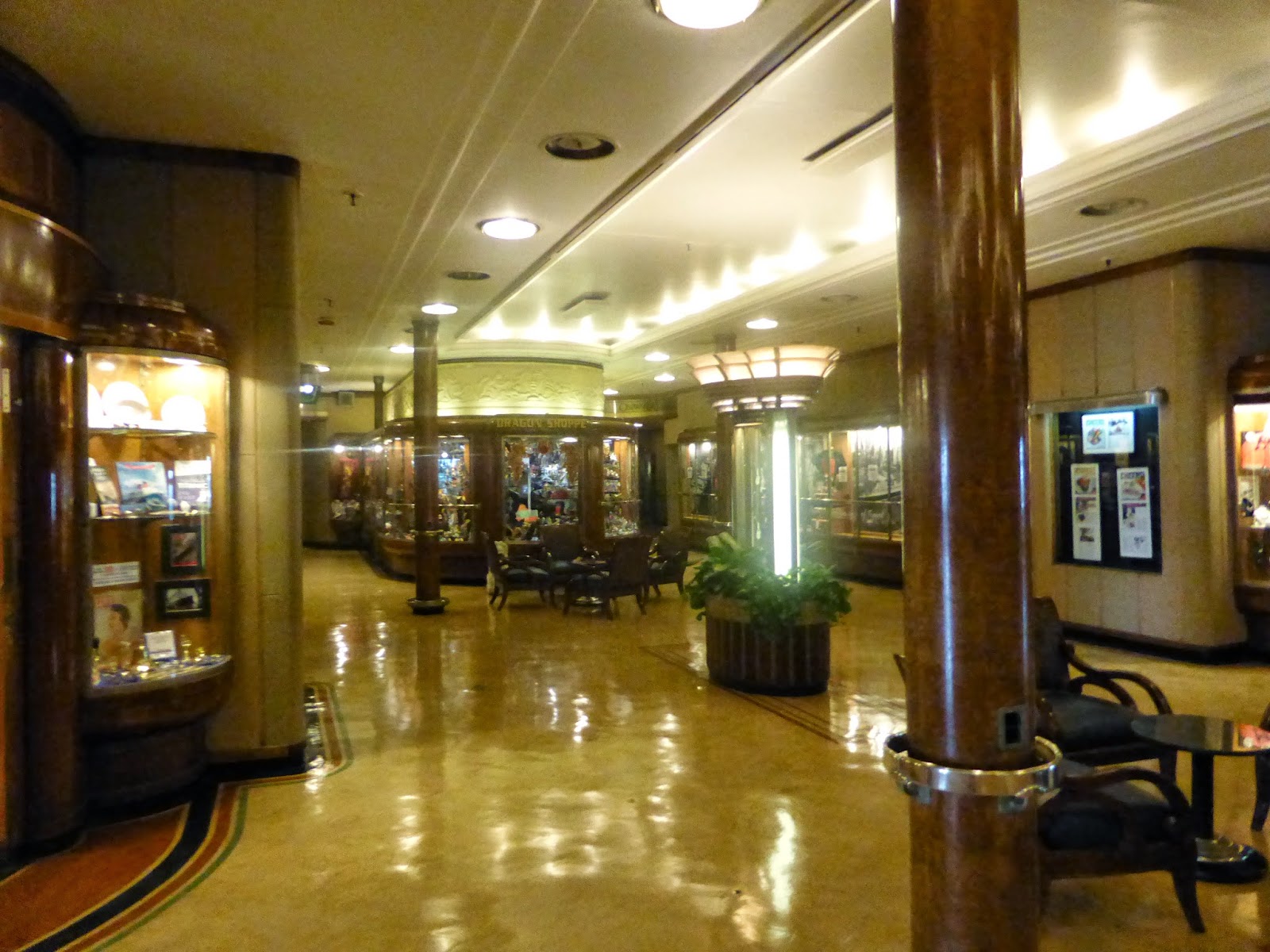 Beautiful!
All that wood was covered in leather to protect it while she was 'grey' 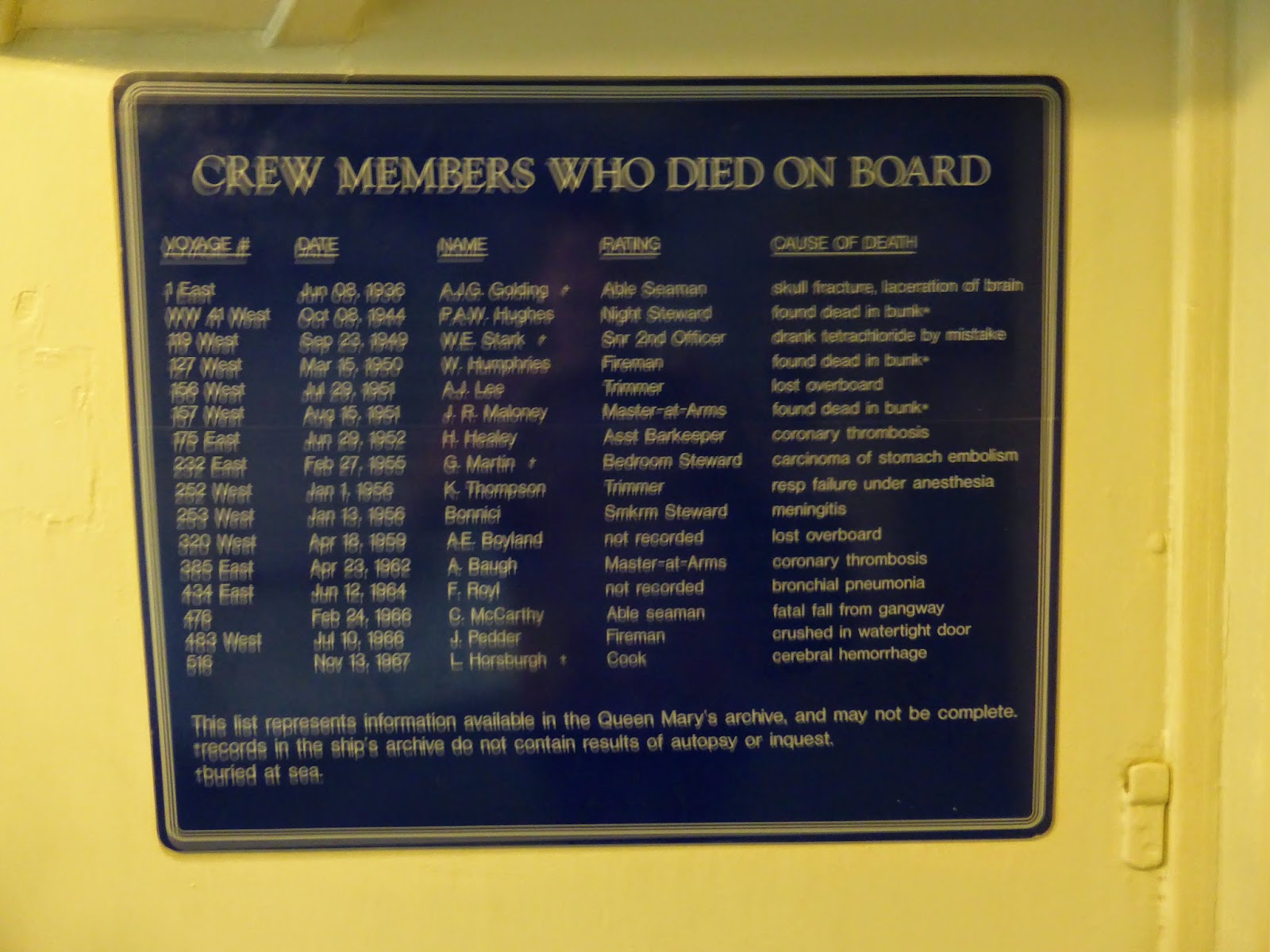 Many more crew died than passengers on board. Their cause of death is well documented and listed.
The ghosts that are aboard now don't correlate with any incidents as they are listed. 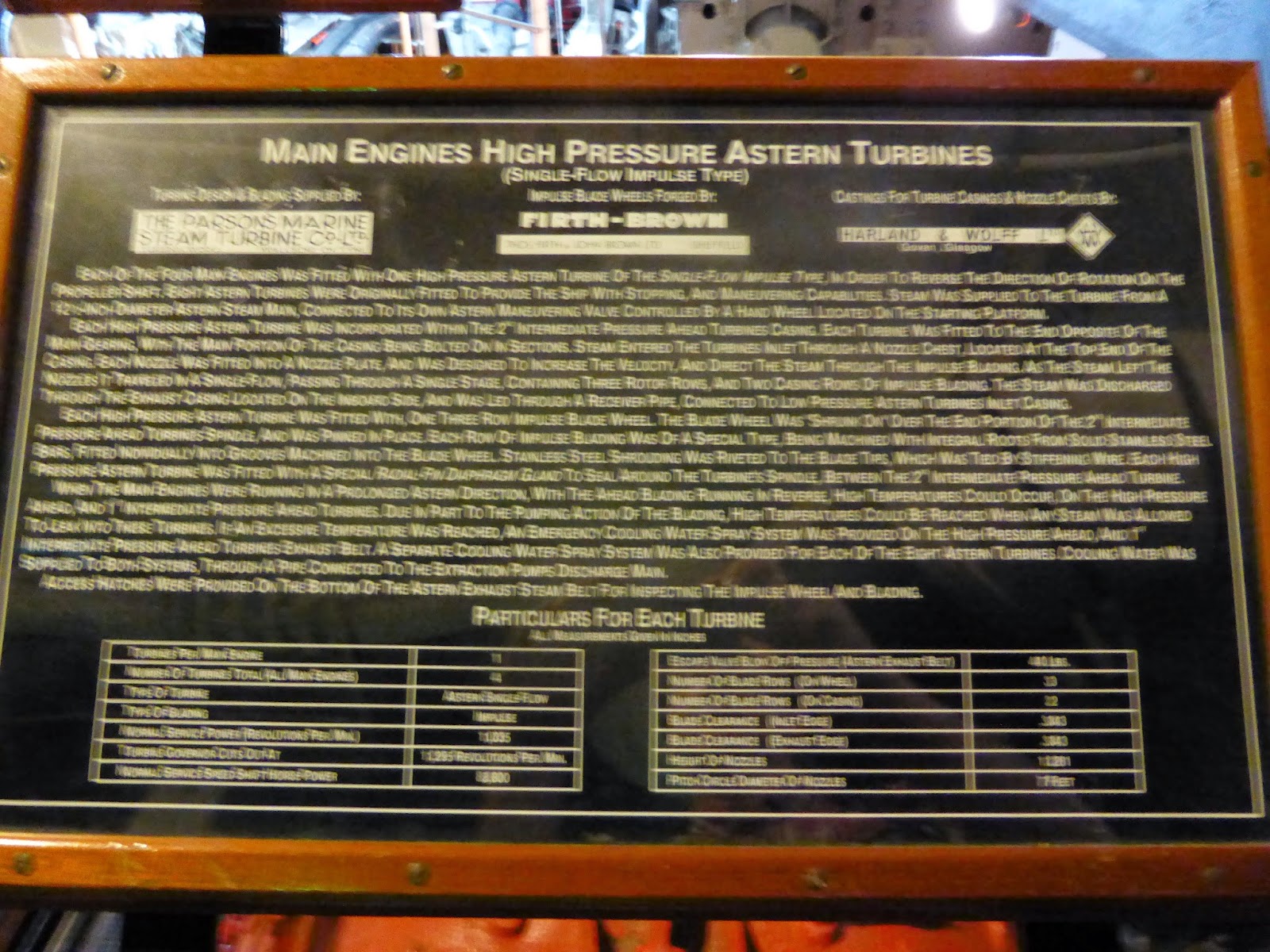 I found this plaque naming the engineering works where my mum worked the comptometer machine. Weird! 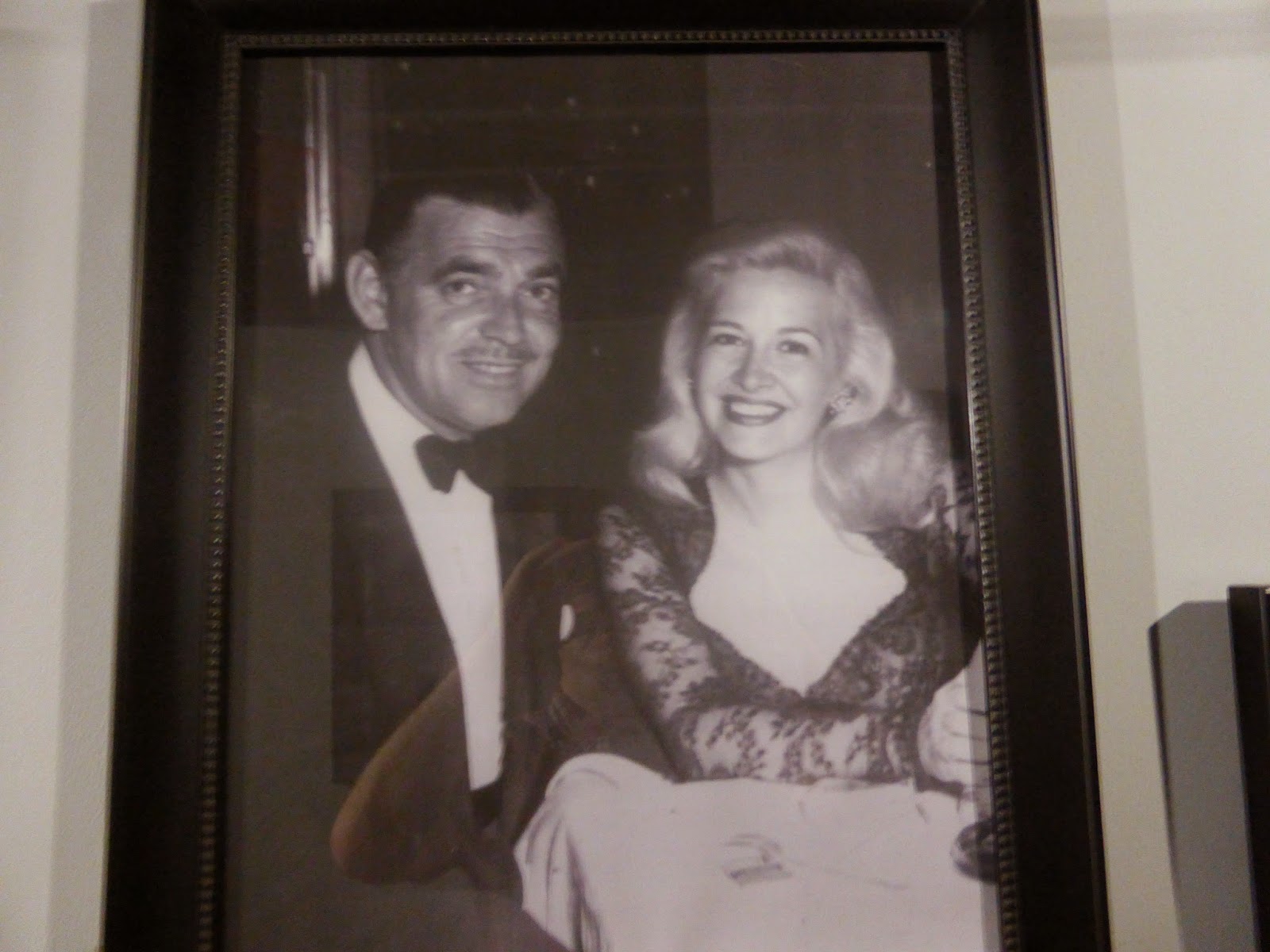 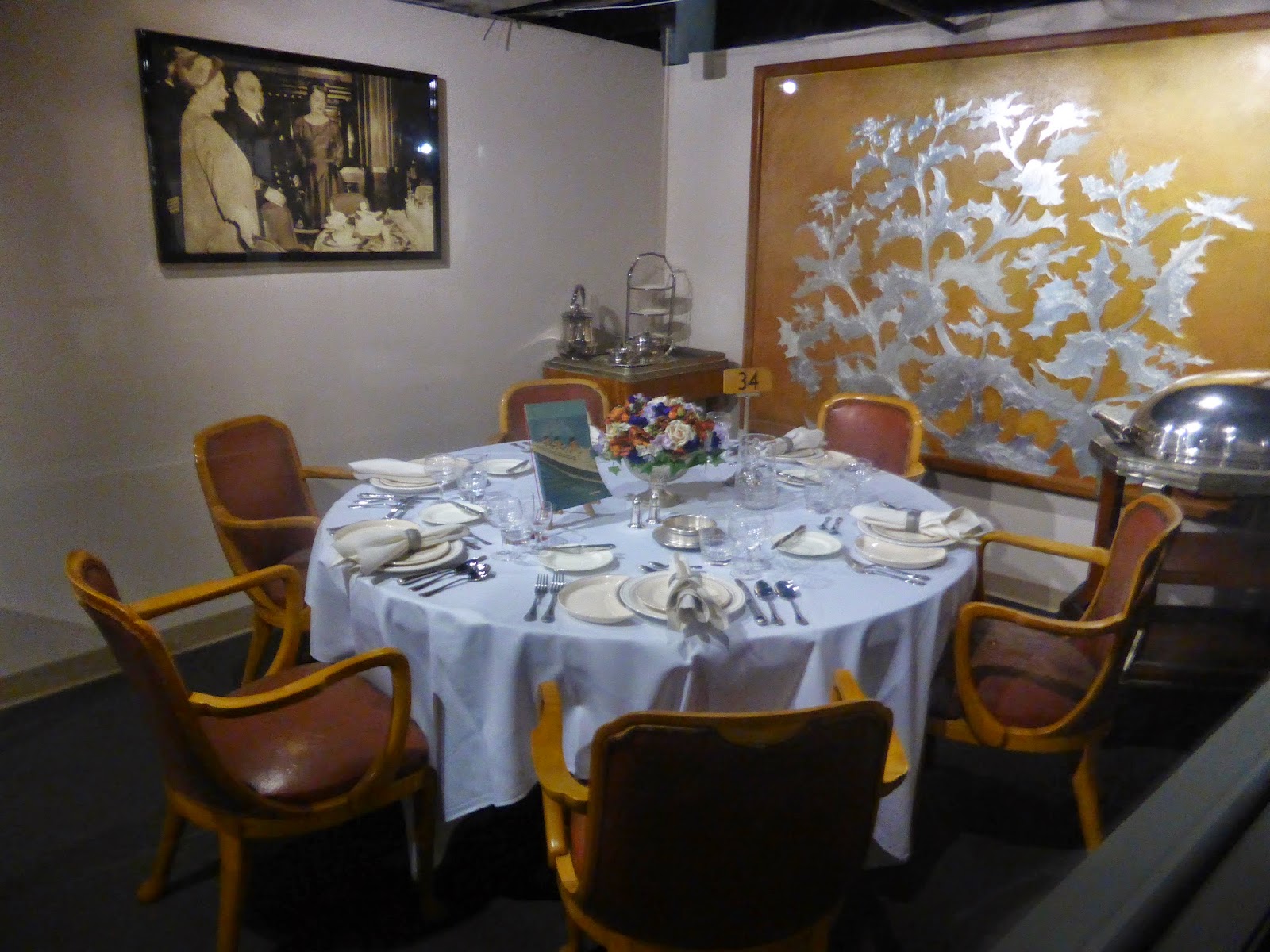 It's a sign of the times that she was the first ocean liner with a Jewish Prayer room,  It was a policy to show there was no religious issue - any body of any faith could travel.

Of course, in any conflict, people have to make difficult decisions. On 2 October 1942, the QM  sliced through one of her escort ships, HMS Curacoa off the Irish coast. 239 lives were lost. But the QM was carrying thousands of Americans of the 29th Infantry Division to join the Allied forces in Europe and was under strict orders not to stop for any reason as the risk of U-boat attack was too high, The QM had been damaged in the collision but managed to sail on.

At the time it was claimed  she sailed on, regardless but later it was claimed that the Cpt sent one escort boat back to pick up survivors from the stricken Curacoa. Even later, a published memoir reports more than one escort boat went back, saving over 90 of the Curacoa crew.
.
Queen Mary was retired after her 1,000th crossing of the North Atlantic.
Her last captain had a geat name; Captain John Treasure Jones. I wonder if he was known as Davie Jones.
My favourite fact, the Whistle on the QM can be heard ten miles away!