A few weeks ago there was a street fair in Glasgow. 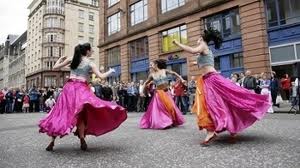 As we milled around we saw a puppeteer  complete with his marionette. The wee puppet was dancing, moonwalking, breakdancing, highland dancing, Irish dancing and generally doing stuff that is really clever when you consider the risk of entanglement.
He (the marionette, I think it was a ‘he’ but he was anatomically ambiguous) started to engage a wee girl in the audience. She was about three years old. They did a wee dance, had a wee bit of to and fro. The puppet pretended to chase her. She pretended to be scared and ran behind her buggy. The marionette then stalked the buggy, pausing every so often for comedic effect, his finger to his mouth- warning to audience to be quiet.
As he advanced towards the buggy, the girl peeked out from behind it, more thrilled than scared. She hid again, the marionette advanced further. Then made a dash for it, neatly hopped into the buggy and sat there, rather pleased with himself, legs crossed, looking smug. 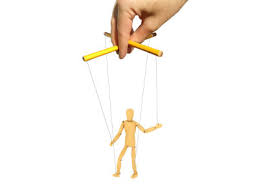 Then the wee lassie came out punched him right in the kisser.
There was a round of applause from the audience.
Somehow if that had happened in LA, I just know it would have ended differently. The wee lassie would have been sent for counselling or incarceration. The marionette would have sued her, her parents and the makers of the buggy. The parents would have countersued for emotional trauma to their daughter. The marionette would then have sued the puppeteer for pulling his strings… where would it end. 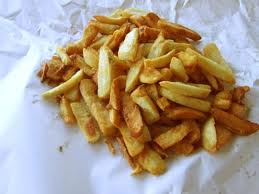 Simple, when in Glasgow, don’t nick anybody chips, don’t drink their Irn Bru and most of all, don’t sit in anyone’s buggy without asking permission first.


Simples.
Caro
Posted by Caro Ramsay at 13:10 No comments:

Those nice folk at the Book Trust have been in touch again, trying to promote their podcasts and asking the authors who have been recorded to blog of their experience. I was ahead of the game there! I have already blogged about my experiences in the cupboard with the wonderful Mr Von Winkle. No I didn’t make up that name – he is actually called that.

I’ve included the link to my podcast – The intro to Blood Of Crows – don’t listen to it while you are eating. I’m planning to dip in and out the podcast site over the next few days, listening to a bit here and there- great while doing the ironing.

Here is an excerpt of the blog I wrote for the MIE website.

Sometimes life is a bit strange as a crime writer, this thought was sifting through my mind as I sat in a cold cupboard, lit by a single bulb with a beardy weirdy American by the name of Ryan Von Winkle. He was holding a dead hamster to my mouth and asking me about dried ice cream. All that is perfectly true, the hamster being the sound recording type.

Frequently a wind-dampening cover called a mic-blimp is used to enclose the microphone. A mic-blimp covered with sound-absorbing fuzzy fabric is usually nicknamed a wind muff or a "dead cat." So I am told.

It was all for a podcast at the Mitchell Library which was old and stuffy but now is all whistles, bells and technical stuff with silent carrels where students can play the piano and sing to their hearts content with no noise pollution to the carrel next door.

So we got up to some serial killing talk in our sound proofed booth.  Mr Von Winkle was very nice but had made the mistake of thinking that I was. When I started reading the start of The Blood of Crows, I saw his eyes shift, looking for the door, making sure the key was in the lock. This was a scared man.

But funnily enough, he had one of those voices like melting chocolate. He carried a  small brown case that you could tell had travelled round the world with him and bore the scars of nearly missed trains, every quick visit to the loo after eating something inedible and indigestible.

I was  talking about Murder Is Everywhere and my writers group. He was telling about his friend wanting to be an astronaut and climbing a ladder 30 000 times as by then he had shown that he could get to the moon. Ryan was then telling me about Nassau ice cream... dry ice cream. Gone too far. A man on the moon I will accept. Folk on Big Brother have an IQ in double figures I can just about accept. But dry ice cream is the end of civilisation as we know it!!

Caro
Posted by Caro Ramsay at 04:02 No comments:

A good night out!

honestly, with friends like this!!
anyway this should be a good night at Waterstones, come along if you can....