The Commonwealth Of Nations!!

71 teams are participating. Six countries have been at every games - Australia, Canada, England, New Zealand, Scotland, and Wales. Australia have the best record so far.

Reading Wikipedia about the games and their history is well… history. Here are some highlights -
“Malawi, Zambia and Zimbabwe competed from 1958–1962 as part of Rhodesia and Nyasaland.  Malaya, North Borneo, Sarawak and Singapore federated as Malaysia in 1963, then Singapore left in 1965. Newfoundland joined Canada in 1949. Ascension Island and Tristan da Cunha were dependencies of Saint Helena, so the territory was officially called "Saint Helena and Dependencies" until 2009. Saint Helena, Ascension Island and Tristan da Cunha became equal parts of Saint Helena, Ascension and Tristan da Cunha in 2009. Western Samoa was renamed Samoa in 1997. Zanzibar and Tanganyika federated to form Tanzania in 1964. Zimbabwe withdrew from the Commonwealth in 2003.”
I hope you got that.

Others eligible include Christmas Island and the Cocos (Keeling) Islands (territories of Australia), Nevis (a federal entity of the Federation of Saint Kitts and Nevis), Rodrigues (outer islands of Mauritius), and Zanzibar (a semi-autonomous part of Tanzania).

And Cornwall are now arguing that they should have separate representation.  The Turkish Republic of Northern Cyprus and south Sudan have now made applications to send teams. The Pitcairn Islands' are discriminated against due to their tiny population- about 54. Lack of permanent population seems to prevent South Georgia, South Sandwich Islands, British Antarctic Territory, the New Zealand territory of Ross Dependency and the Australian external territories of Australian Antarctic Territory, Ashmore and Cartier Islands, Coral Sea Islands and Heard Island and McDonald Islands from competing. 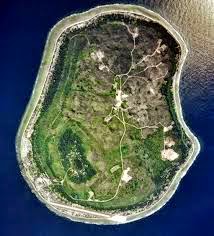 But then Nauruan weightlifter Marcus Stephen who won twelve medals between 1990 and 2002 ( 7 golds) ended up being elected President of Nauru in 2007. Nauru is the smallest independent state in the Commonwealth, 21 sq k yet it is 19th on the all-time Commonwealth Games medal table.

I had to look it up

This week, the outfit to be worn by the Scottish athletes was unveiled. They shouldn’t have bothered. The first medal to be awarded is for the worst outfit. Scotland and Australia are battling it out – we are winning.
It is awful.
This is Australia's and ours is much worse.. 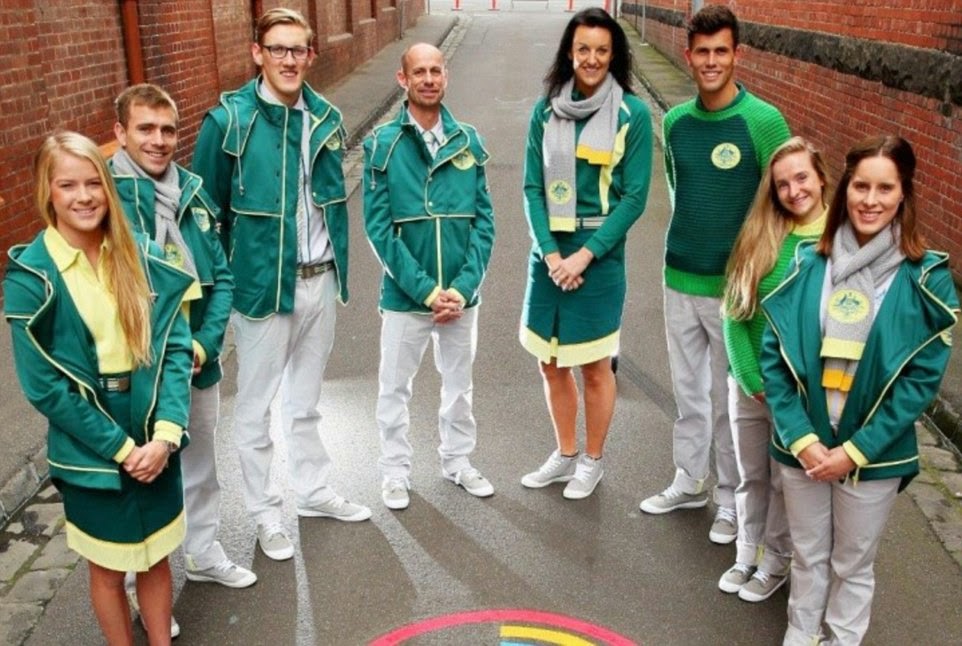 The blue shirt has white speckles on it which looks as though a pigeon with a bowel issue has flown overhead. The tartan is supposed to represent heather at dusk, I presume this is a woman called heather, not the plant, and that heather is suffering from  homeochromocytosis.
And the colour of the socks? Wit?
Scottish sports presenter Dougie Donnelly said: “Team_Scotland Seriously ? The team are going OUT like that ? !!”
Others have commented the miracle of inventing a colour that clashes with itself.
Others speculate that Chris Hoy got wind of it and retired.
“Somewhere in Aucherader a tea room is missing its curtains," wrote Stephen Daisley at STV. "The shirts and dresses are not blue, not quite lapis lazuli, but the psycho-cerulean hue of a particularly vivid Smurfs doll. The kilts and shawls carry an amber, fuchsia, and aquamarine tartan, a curious mixture of the psychedelic and the twee. This is what the Sixties must have looked like in Ecclefechan."
People have described it as  "humiliating", "embarrassing" and "truly horrific "wrong on so many levels" and "the worst kit ever".
I liked the comment that ‘those Scotland uniforms look like something from the Eurovision Song Contest-1980.’
Simon Ricketts said ‘They look like they're in a fancy dress episode of a Spanish soap opera.’ 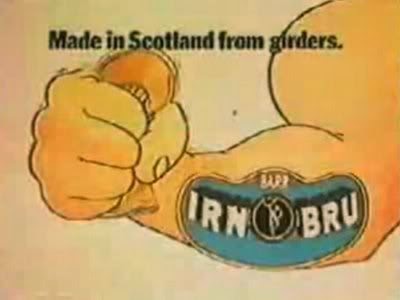 All getting a bit plaid out!  So I had better show you, don't say you were not warned... 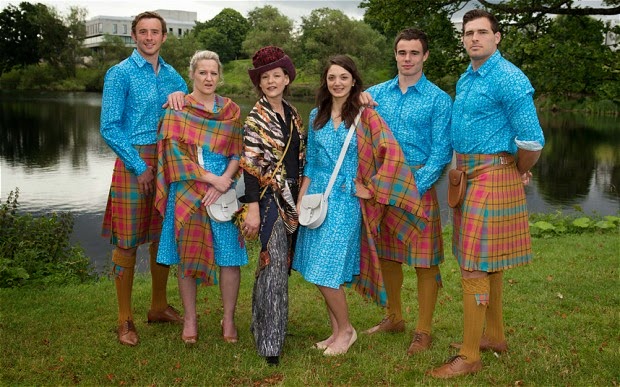 It is officially described as a  vibrant blue shirt  with a  pink, caramel and blue tartan kilt for men. The women  are just as bad- a blue wraparound dress with a tartan shawl. The uniform for women was made complete with a stone-coloured leather bag.  The bag might serve the same purpose as the wee bag you find in the netted compartment of the seat in front of you on a long and bumpy flight. Rugby 7s player Lee Jones described the outfit as “very comfortable and eye-catching”.
Is that the rugby seven’s for the visually impaired…
The designer Jilli Blackwood , a  graduate of Glasgow School of Art said: “There will be no mistaking that this is the Scottish Team as they proudly step out at the opening ceremony.”
Indeed.

However the games have given us great moments 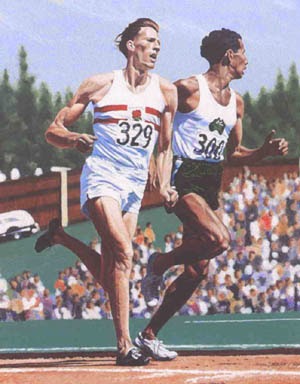 The 'Miracle Mile' in Vancouver 1954  England’s Roger Bannister and Australia’s John Landy.  The only two sub-four-minute milers in history at the time. They were under the four minute barrier again, Bannister won by a narrow margin. He said that last lap was ‘one of most intense and exciting moments of my life.’ 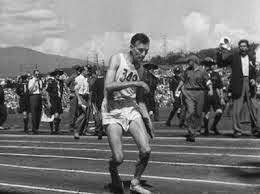 And that famous piece of film of Jim Peters collapsing in the marathon, same year. He had lead by three miles earlier in the race, pushing himself to heat exhaustion and then collapsed time and again. Eventually his masseur  managed to hold onto him and stop him mid stagger 200 yards short of the finish.
He had actually covered the marathon distance, the course was later measured at 27 miles! 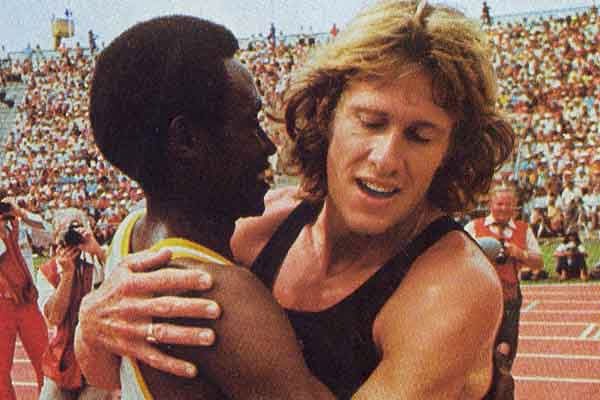 And in Christchurch 1974, that famous 1,500m. maybe the greatest  ever at that distance.  Filbert Bayi  ran three minutes, 32.16 seconds. He was 12 metres clear at the halfway stage, however on the last lap local stars Rod Dixon and John Walker – the two black shadows   closed down forcing him to kick away.  Nearly everybody who crossed the line that day broke a record of some sort, it was so fast. 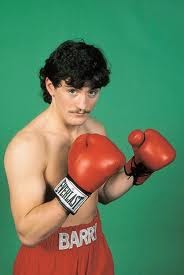 In Edmonton 1978, the  17 year old Clones Cyclone ‘Barry McGuigan boxed to victory in the bantamweight class, aged just 17. He  could not stop crying as he received his medal. 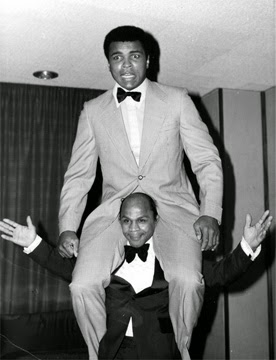 Edmonton 1978 I have no idea why my granddad was a fan of ‘Precious McKenzie’ but he was.   The queen was too!
She was late for an official function because she wanted  to witness him get his third gold medal for weight lifting. He was only 4' 9". 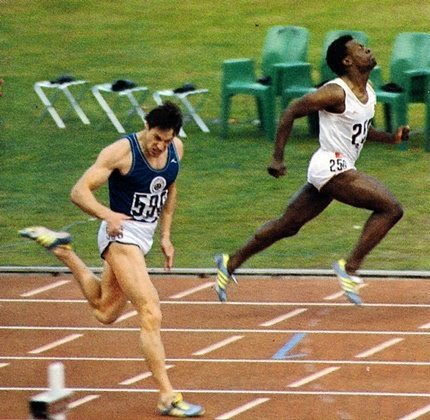 And the dead heat? Allan Wells and Mike McFarlane tying in the 200m, Brisbane 1982. Not an inch between them, it remains the only time a dead-heat for a gold medal has been ratified in a major championship. 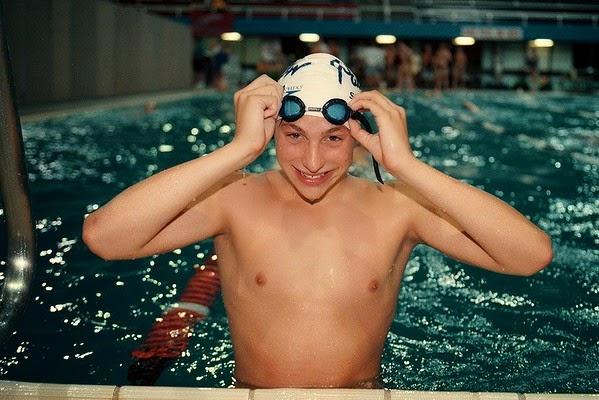 I am not too chuffed at the games, the road race cycling coincides with my book launch. Crime writers in lyrca? Anybody?
Caro
Posted by Caro Ramsay at 12:58 2 comments: