So we went to Bloody Scotland Crime Writing Festival tired, battered but in my case elated. Was met by  folk telling me it was a shame that the chance to help our children had been thrown away. That was by somebody with four houses, only one of them in Scotland so go figure. Looks were exchanged round the green room, sounding each other out silently. Easy really, the yeses are vocal, the noes keep quiet.
There was a debate at the festival where the yeses were told to go home and greet (cry) about the chances they have lost. My own event was on at the same time so I can't comment and the quote above was the only one being banded about.

I had my own problems. If I can be a female for a moment, I had to do three costume changes, two events, without the use of a hotel room to change in ( it wasn't ready) and  I caught the hem of my trousers on my heel so I had a long leg and a short leg. I do  have one leg three quarters of an inch longer than the other but the uneven  leg didn't match the uneven trouser leg. If you see what I mean, the long trouser was on the stumpy leg.
So I had to change from this comedy physio outfit to something you will see later...
I don't know if it was deliberate but it was not fair. The Bloody Scotland football match; Scotland versus England ended 13-1. The Scots were fine young men and good footballers. The England team were a bunch of dads. Not sure that they were on the same songsheet never mind score sheet.
The Scots were taking it very seriously. It was only 36 hours after the result of the vote. 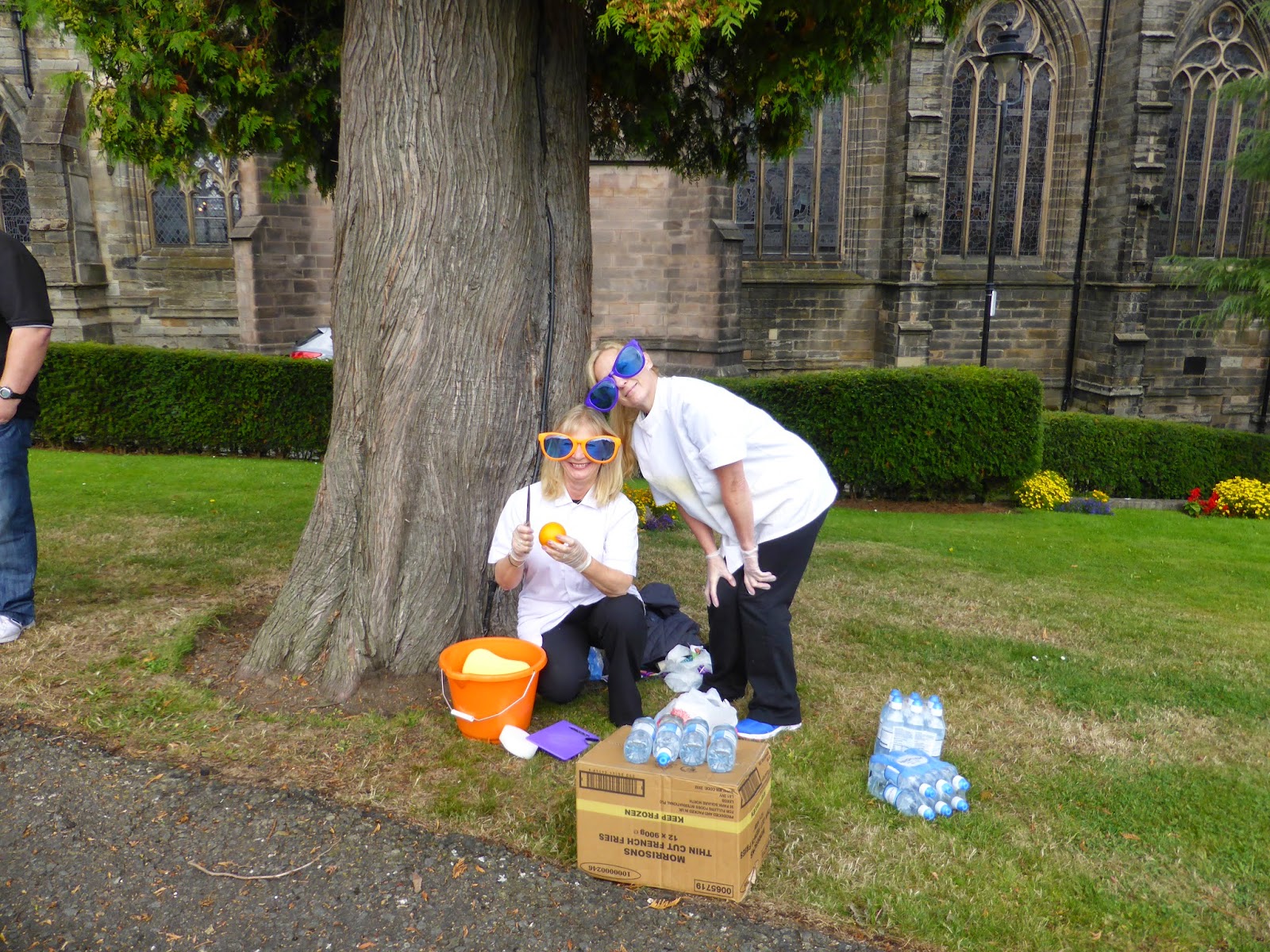 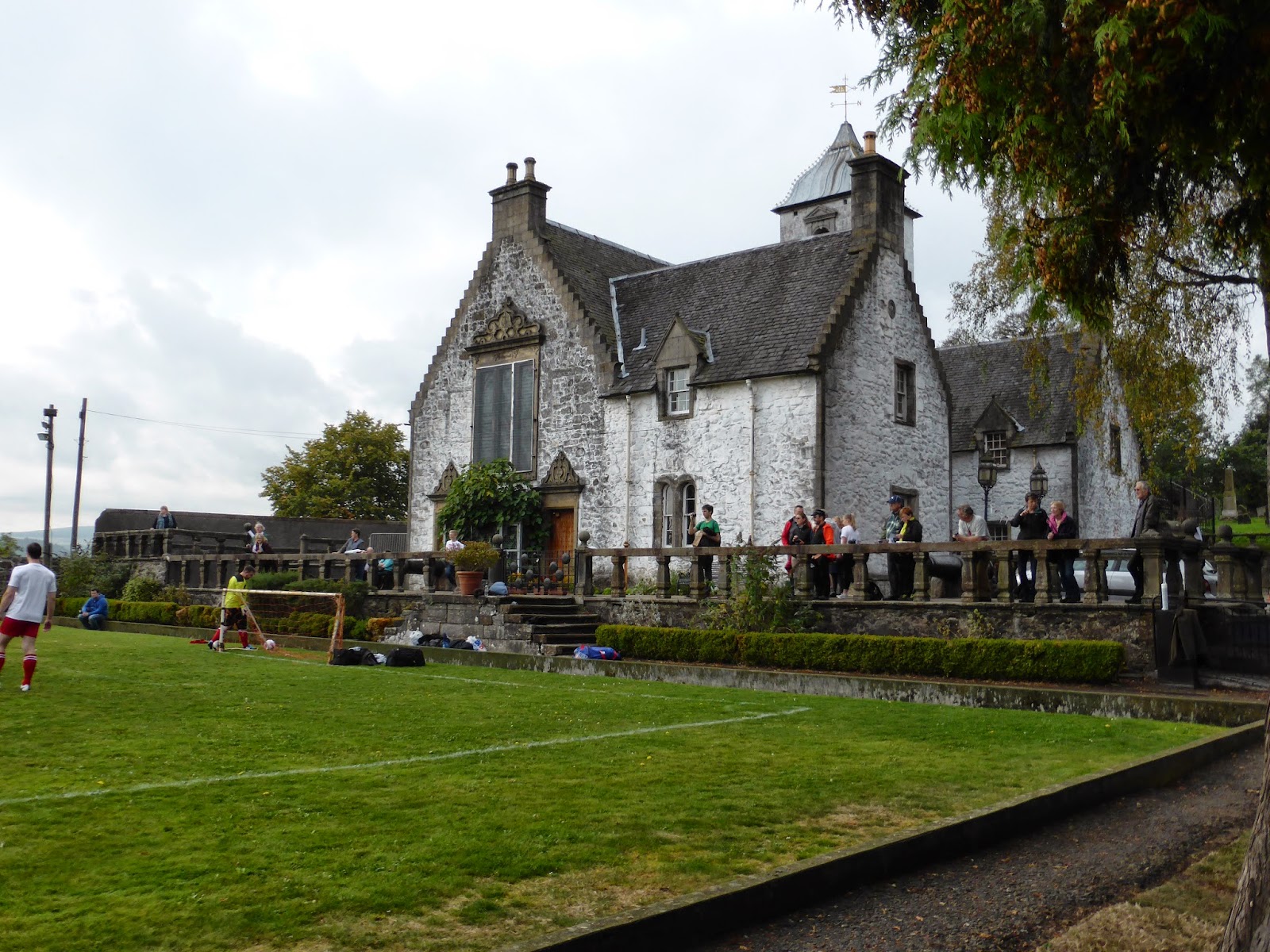 you can just make out the metal grids to protect the windows. 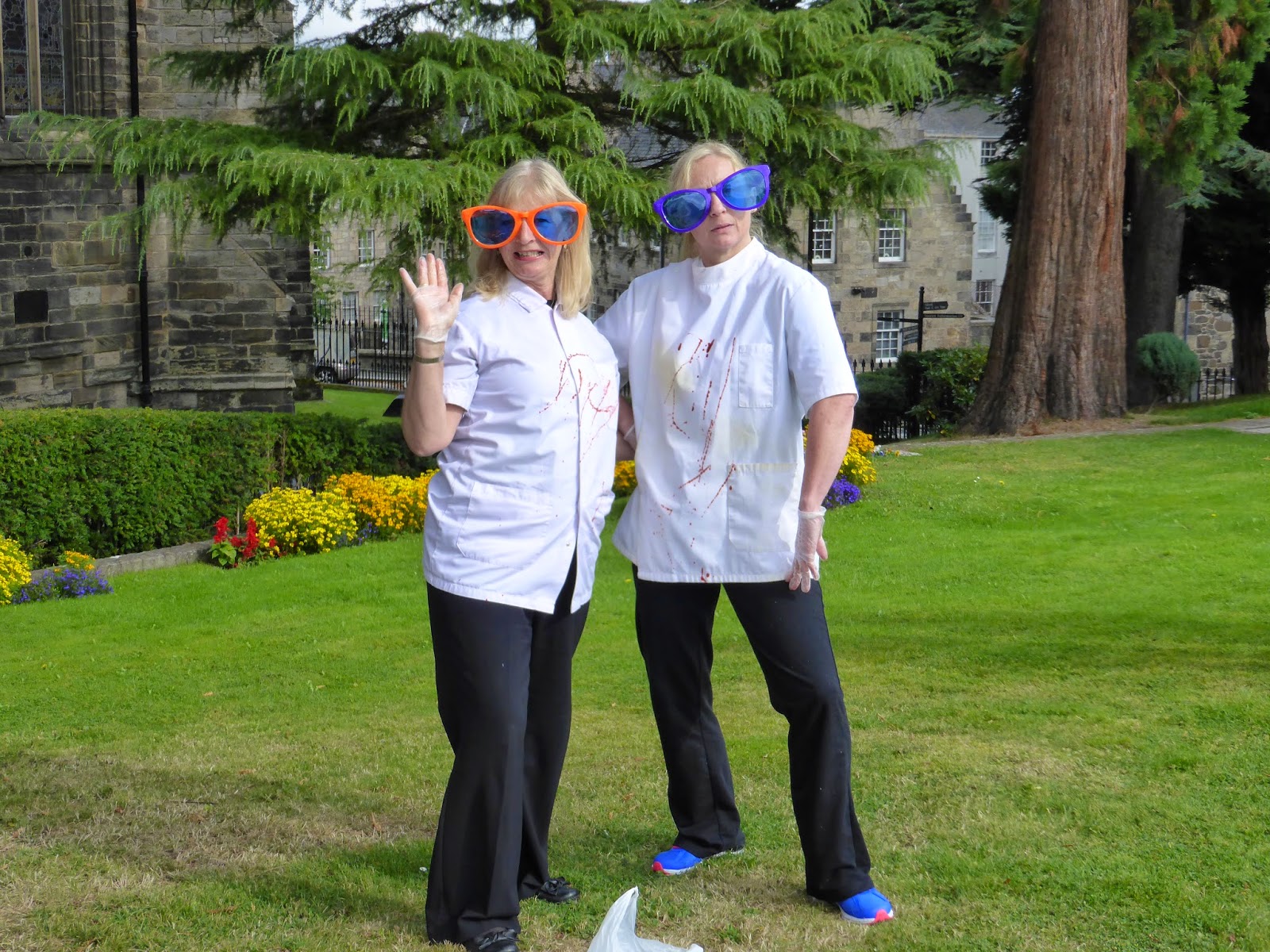 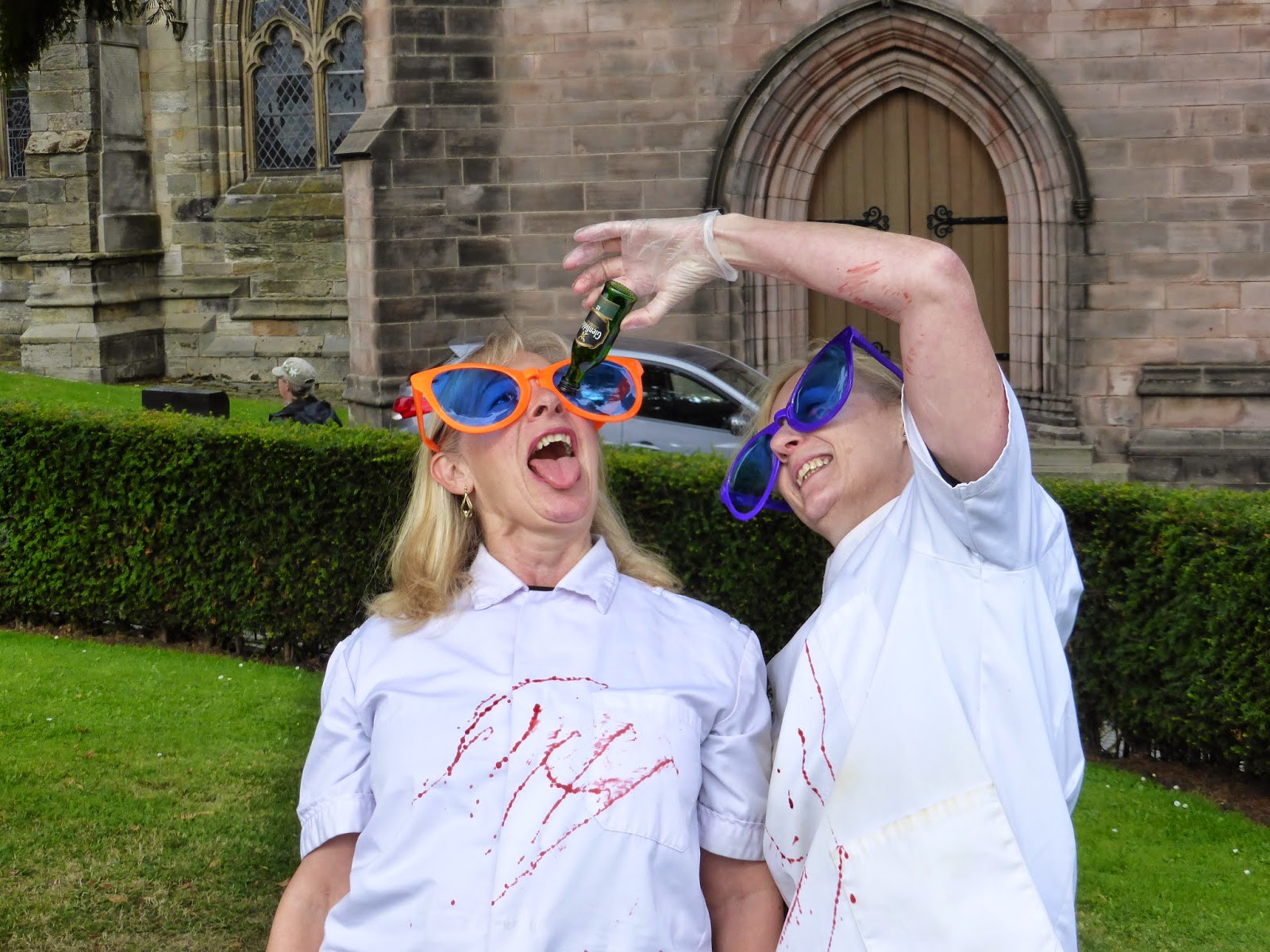 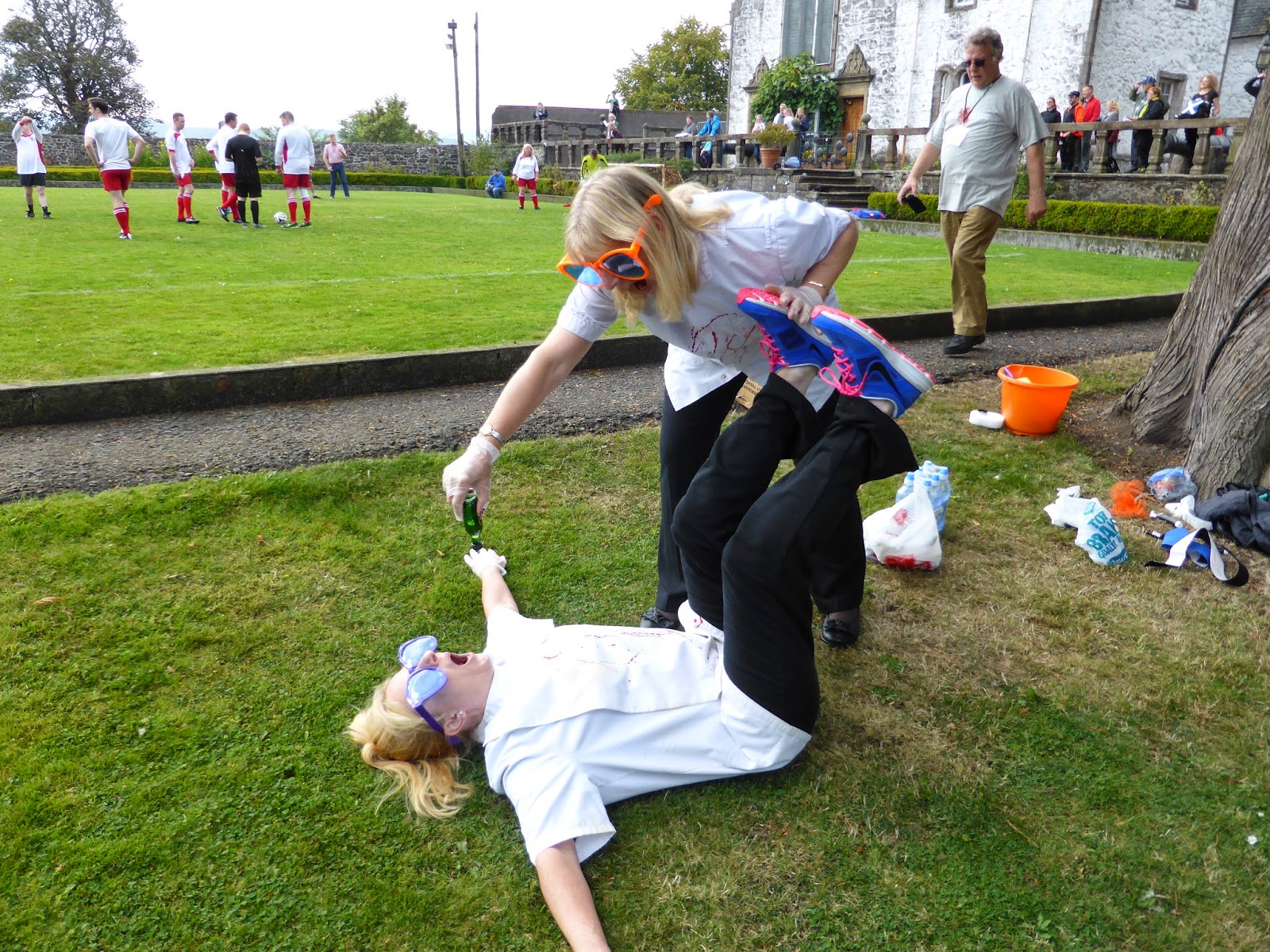 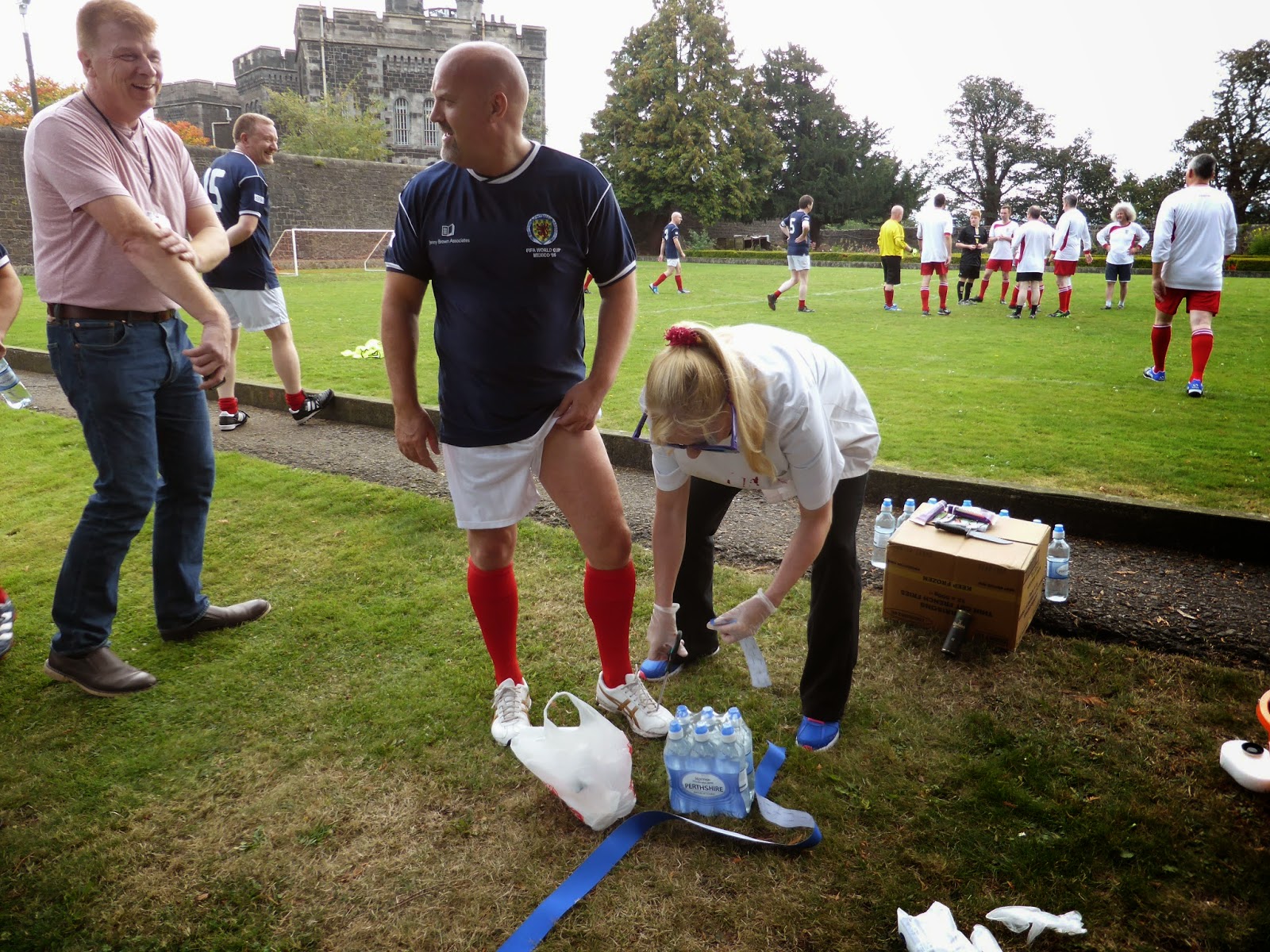 Michael pretending he had a groin strain 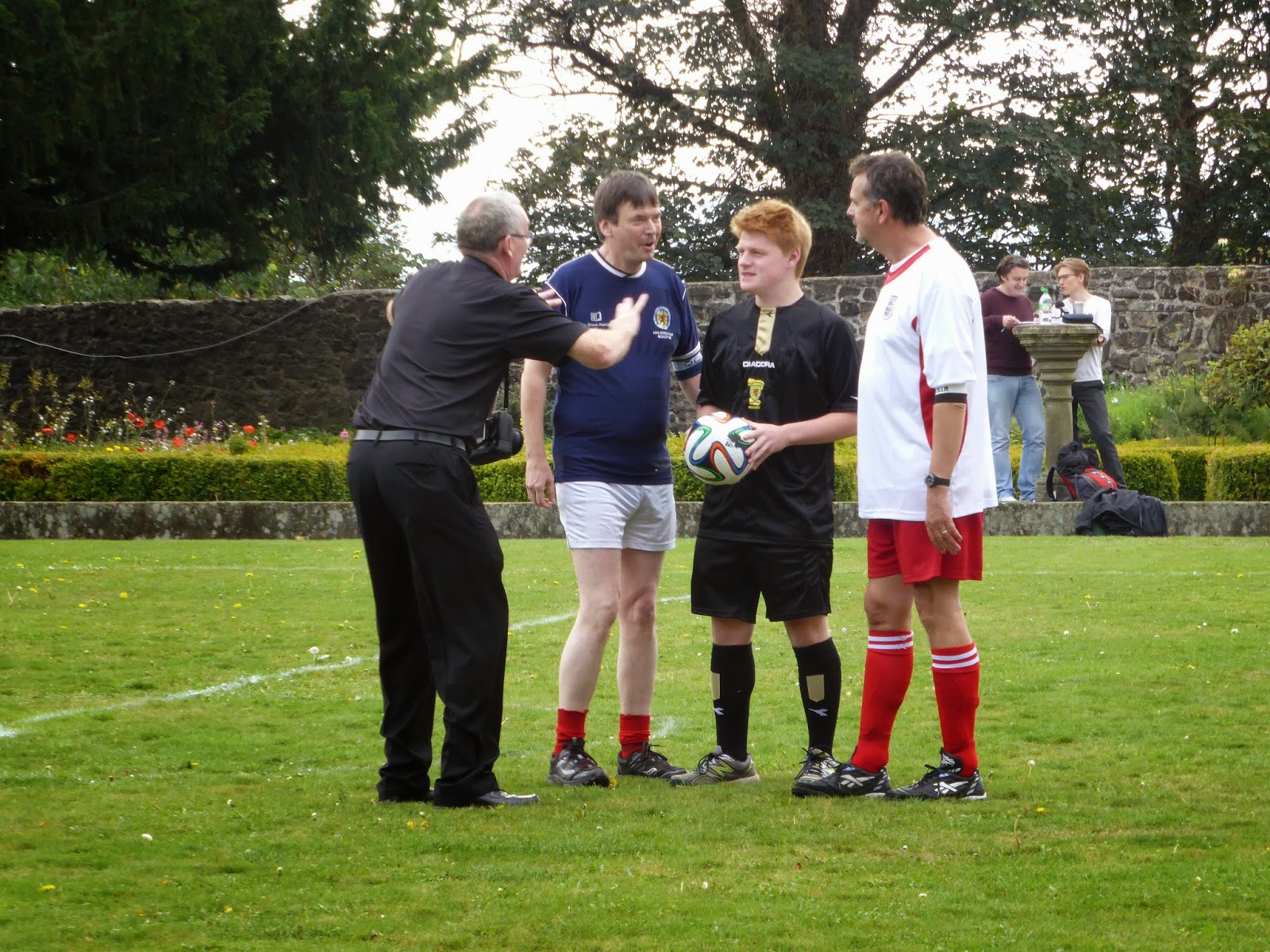 Mr Rankin, Mr Billingham. How can that Ref be neutral, he's a very Scottish looking person 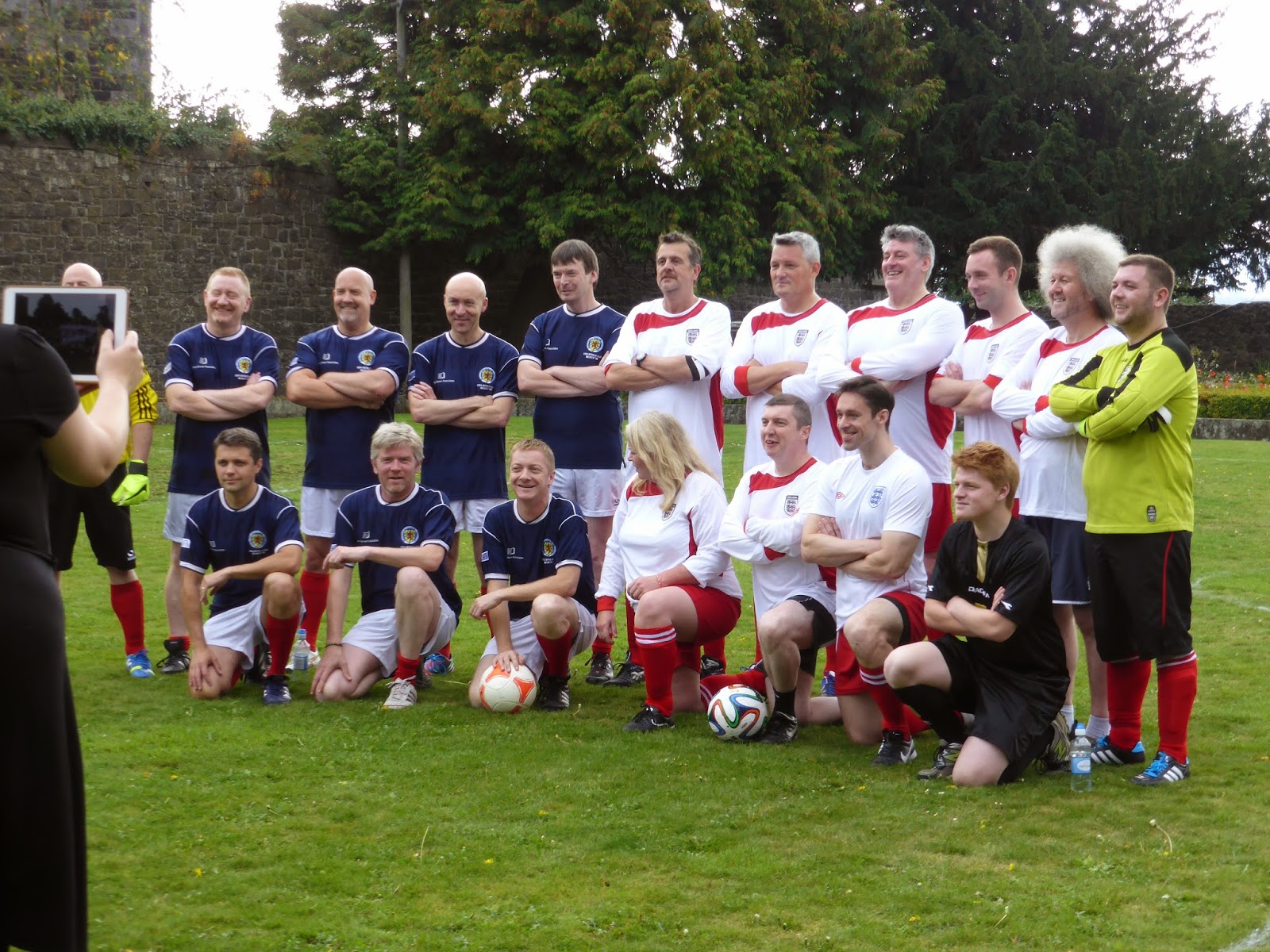 Yip, that's Dirk with the hair! 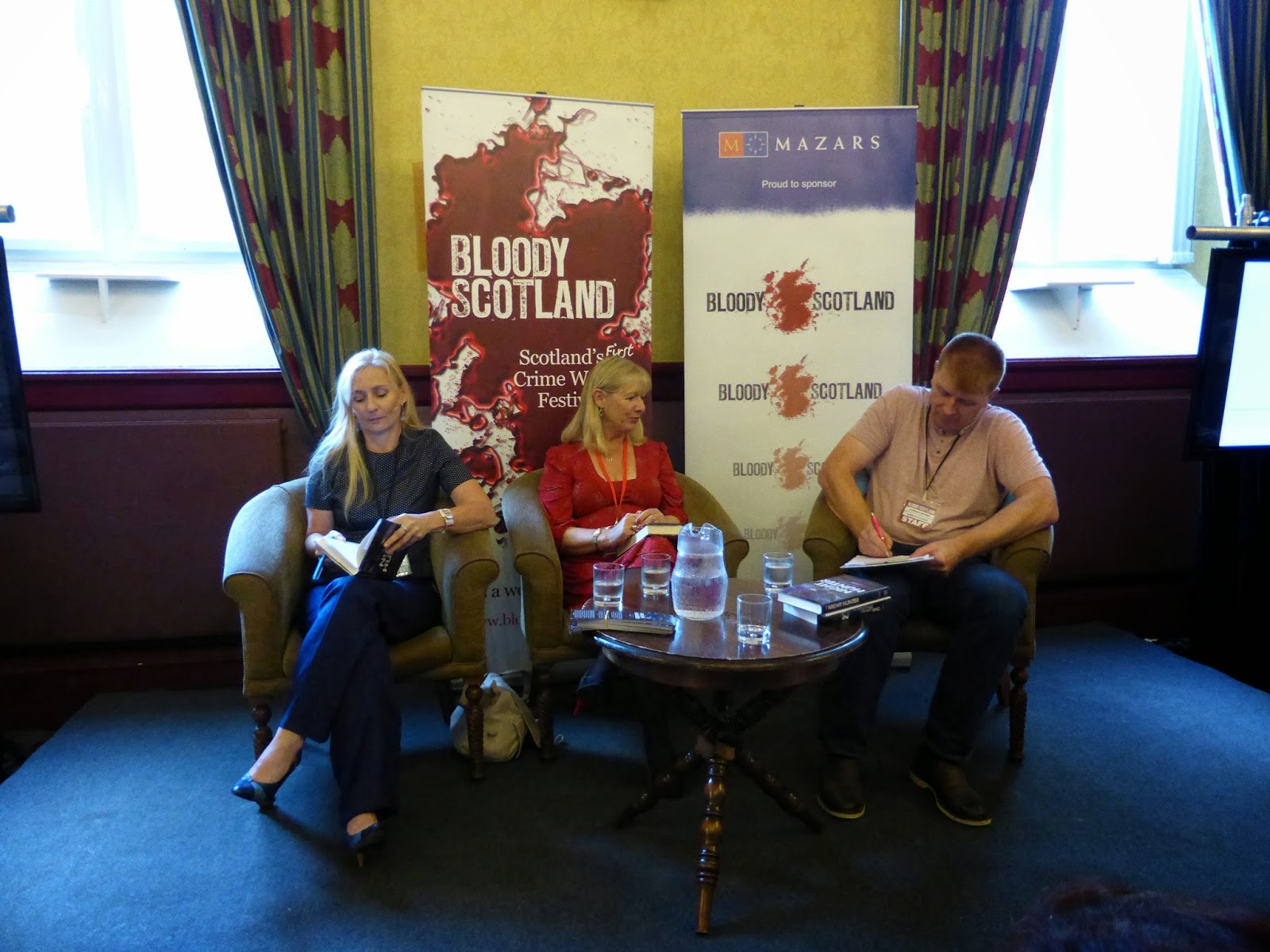 dressed for sell out event with Alex Grey
(even trousers) 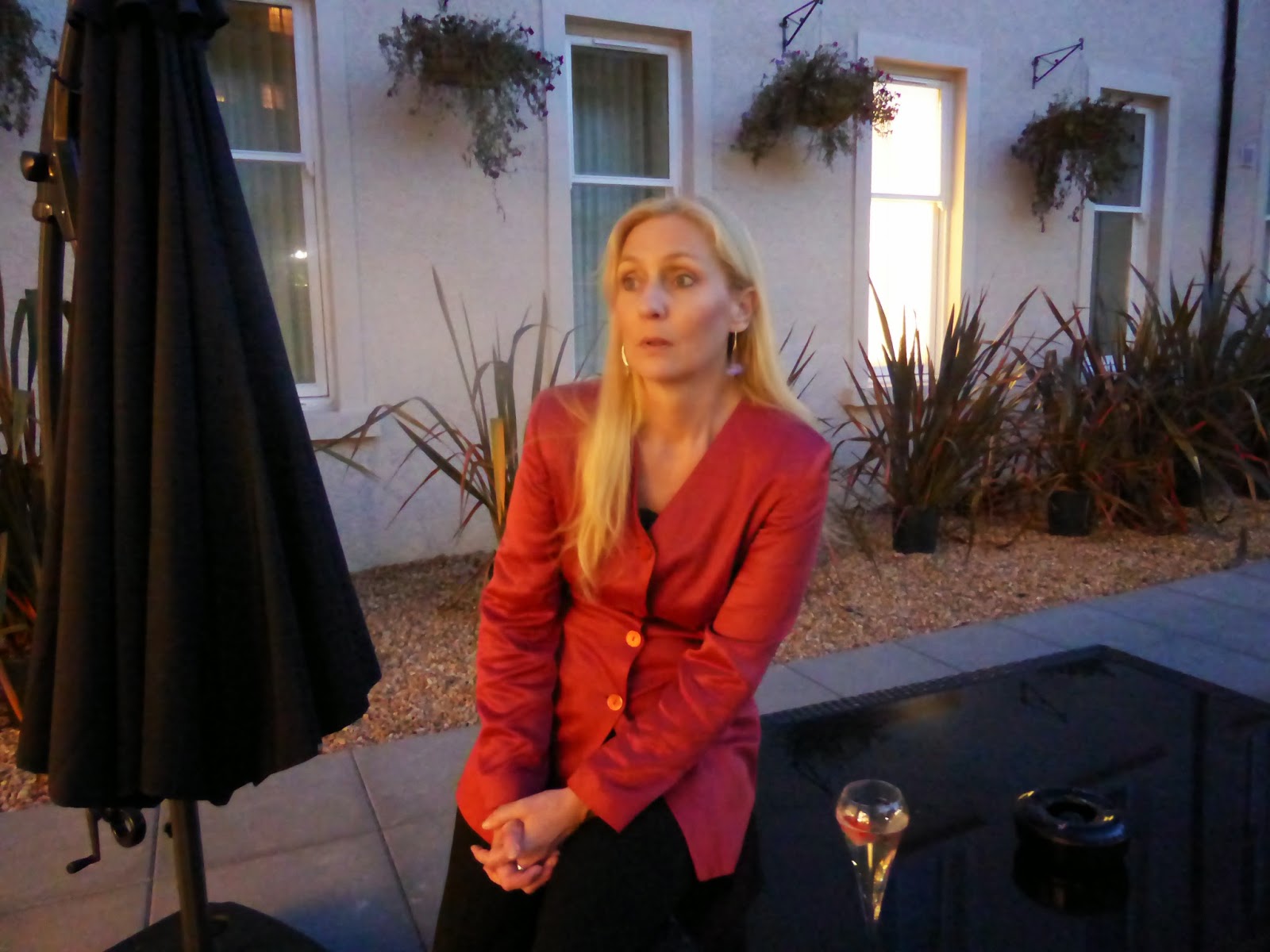 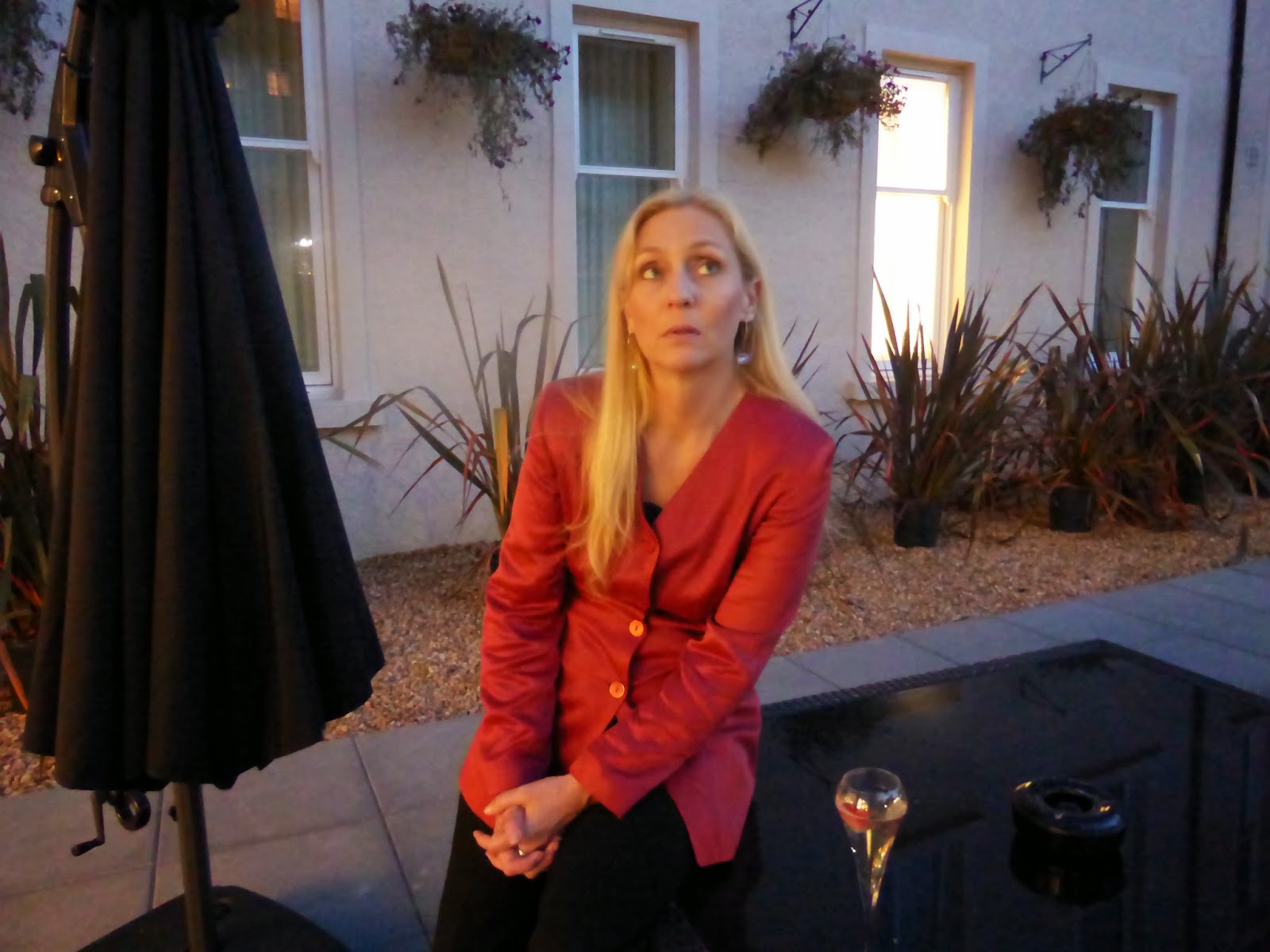 bloody hungry at bloody scotland, where is my dinner.... 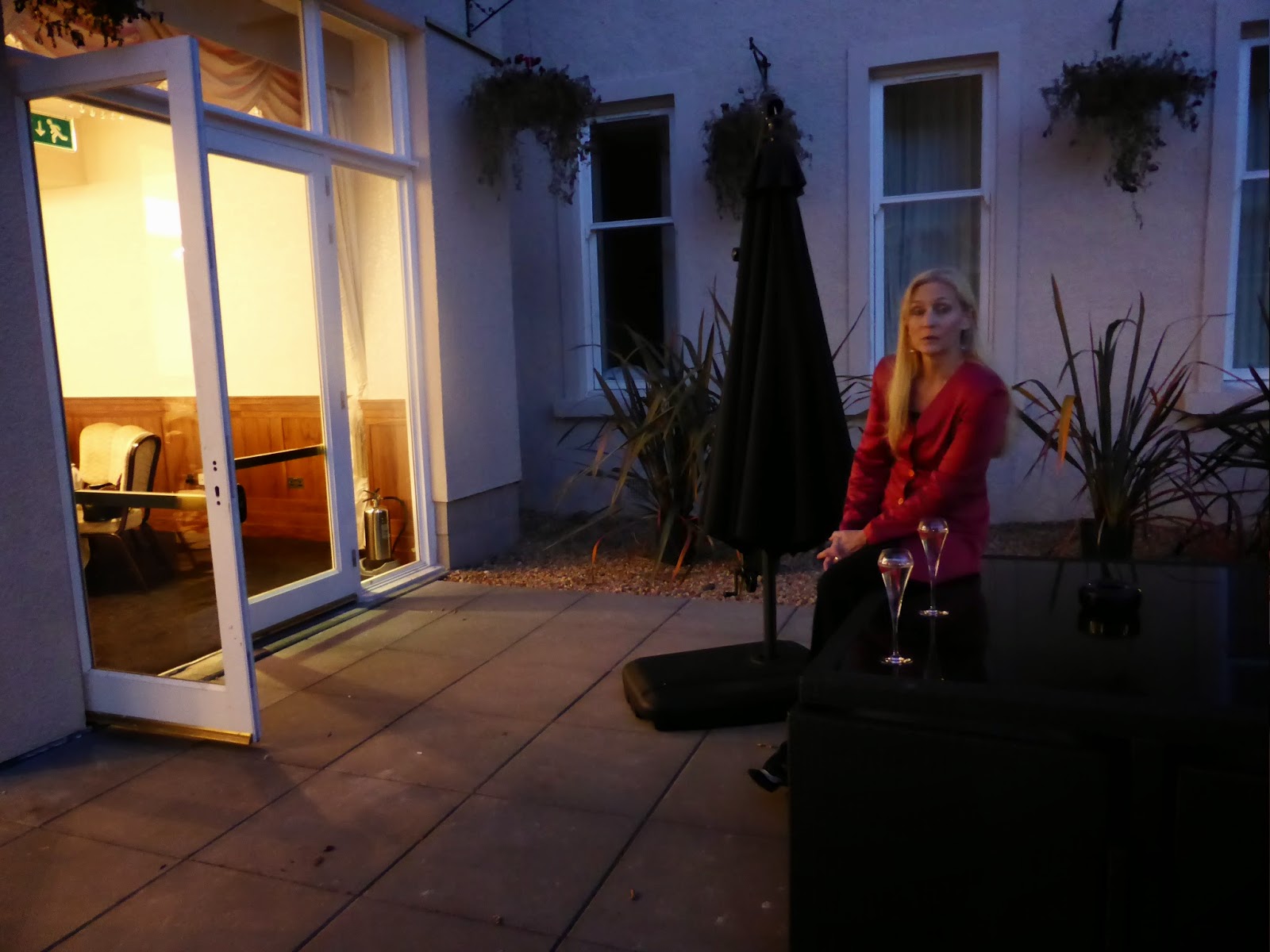 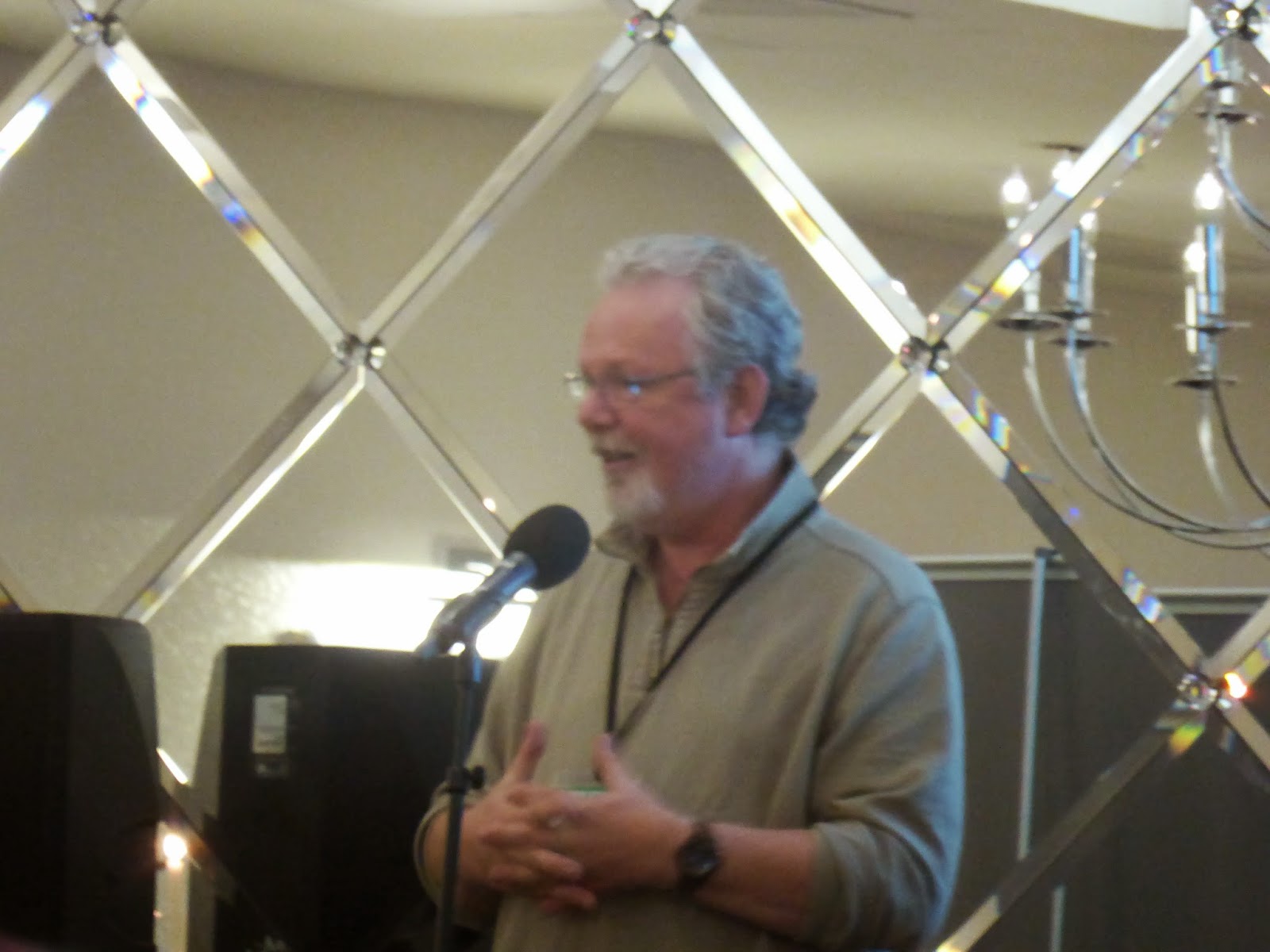 Peter May won the Scottish Crime Book Of the Year with Entry Island. We all got a copy 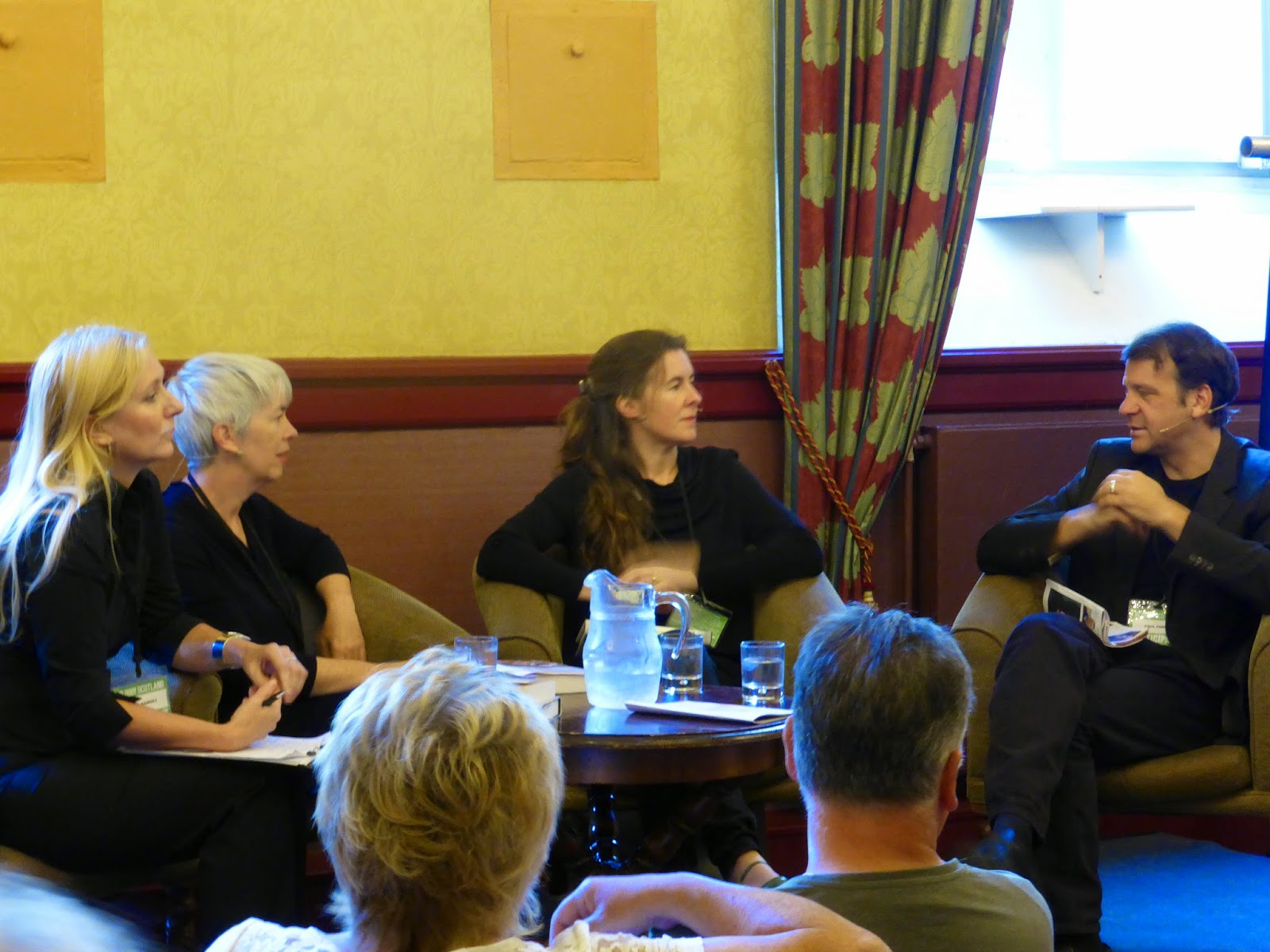 The next day, interviewing  two authors, one of whom was two persons...it was a Stan/ Michael situation. I was worried the singleton would not get fair airtime but it went OK. 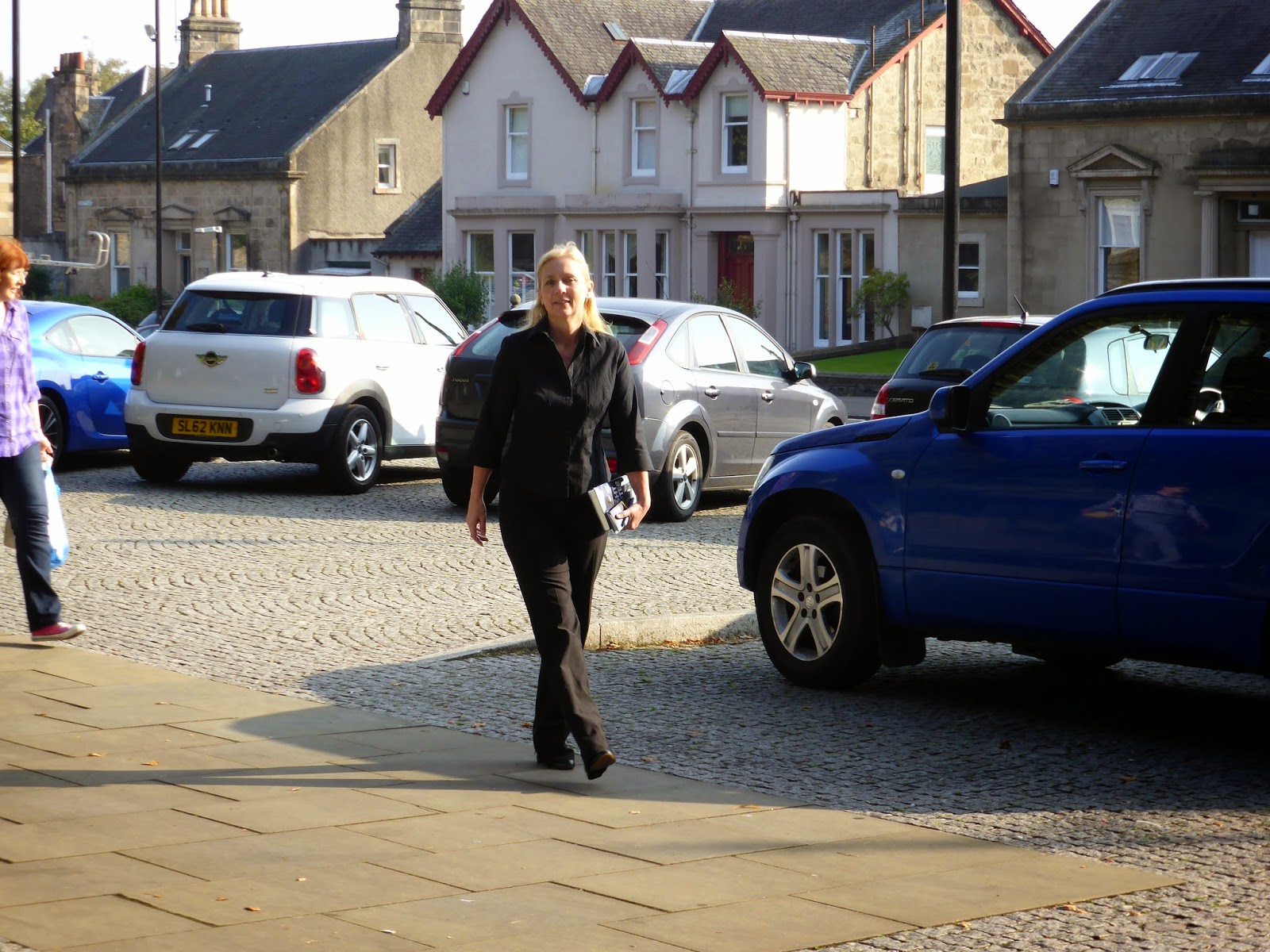 walking from a to b on Sunday afternoon,  note uneven trousers... 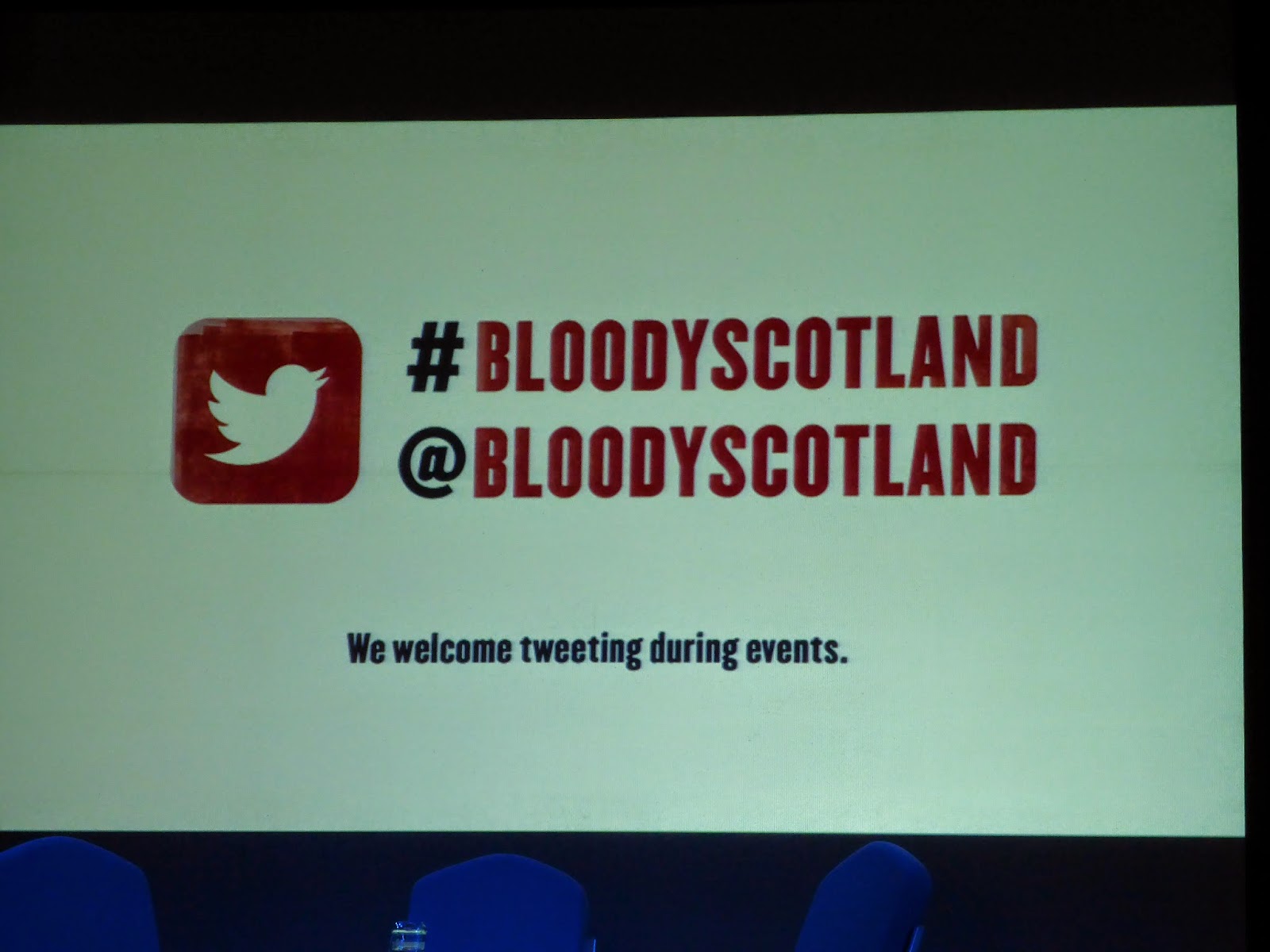 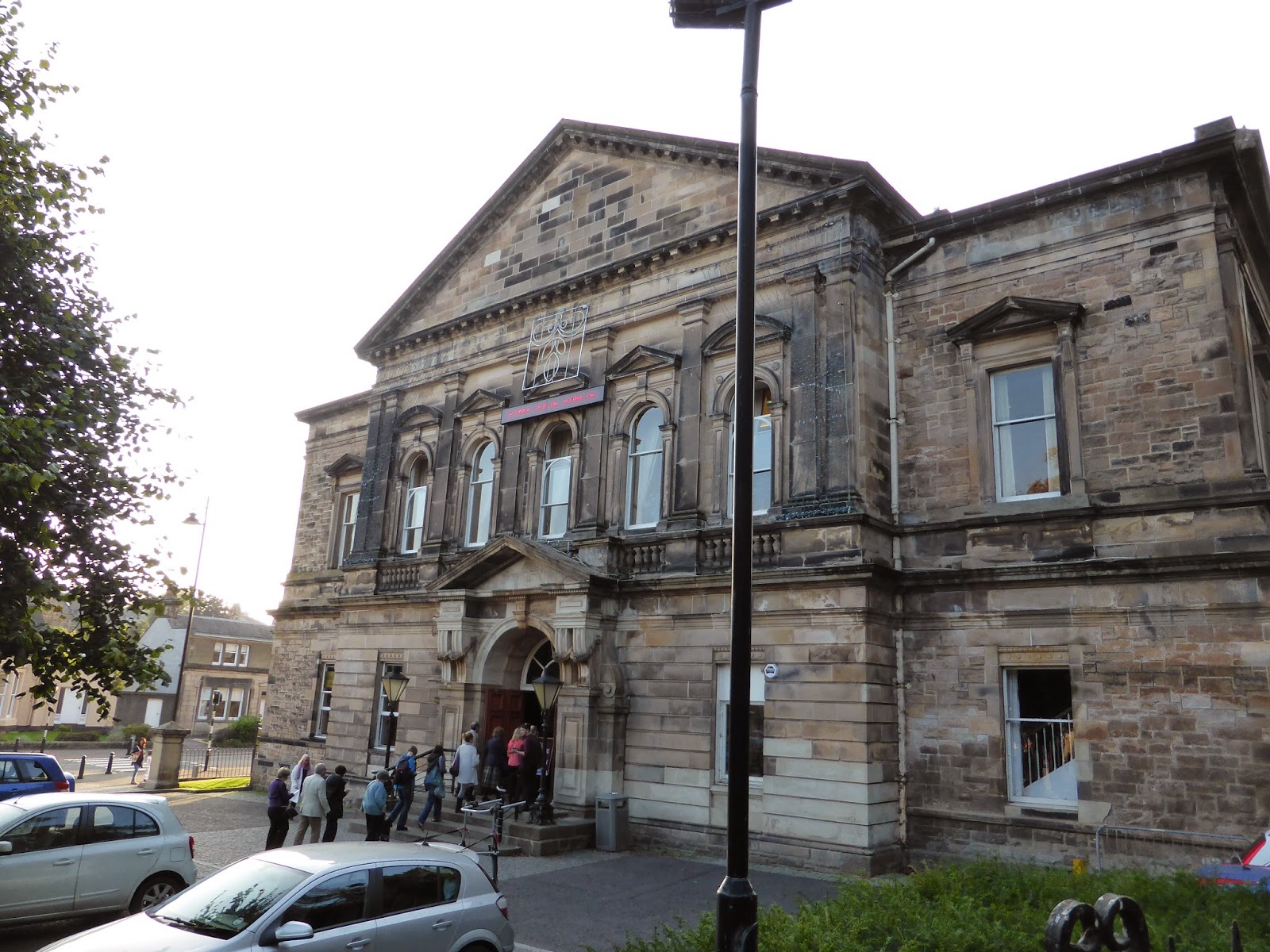 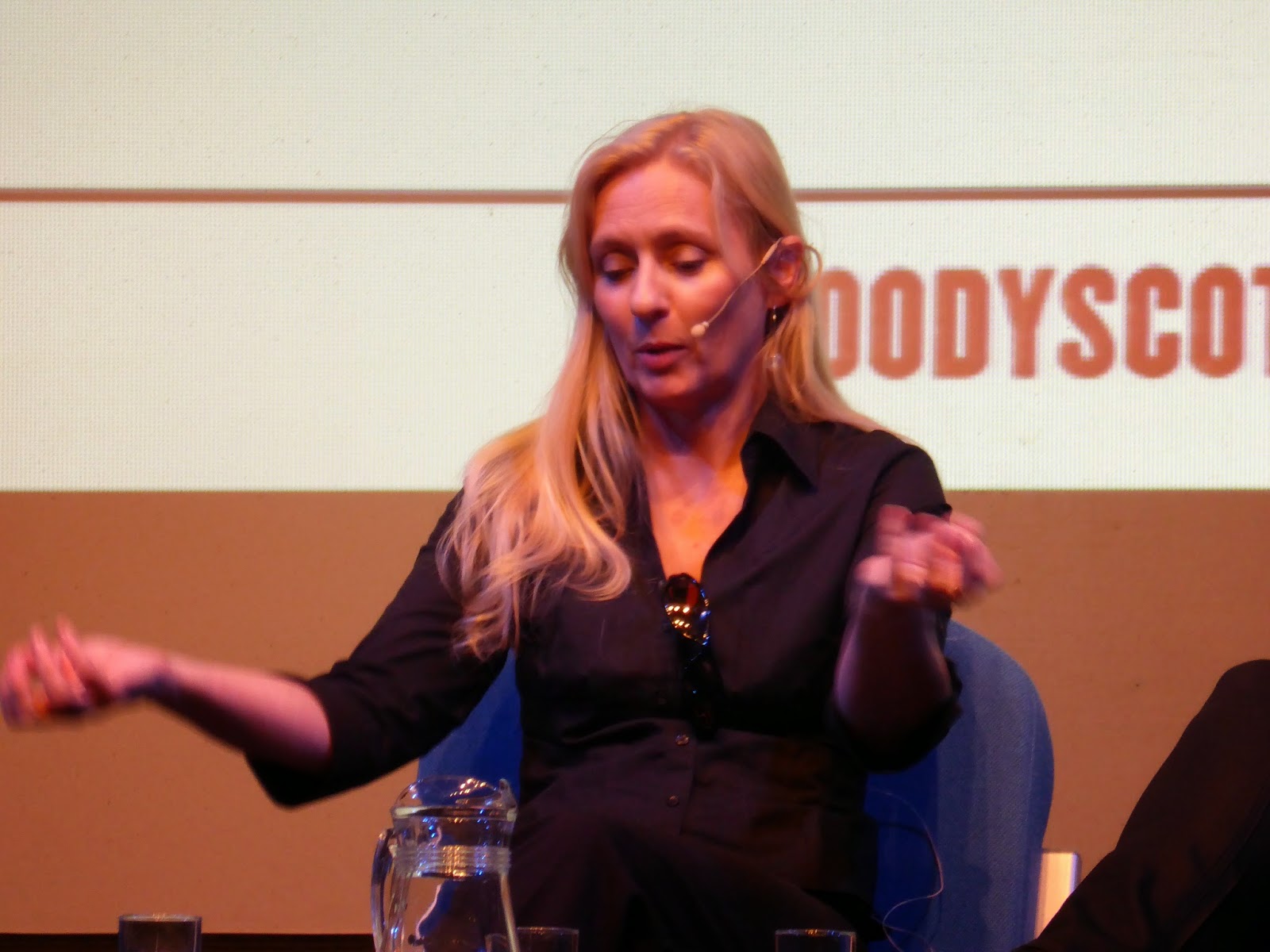 Don't know what I am wittering on about here, but it was very witty and clever... 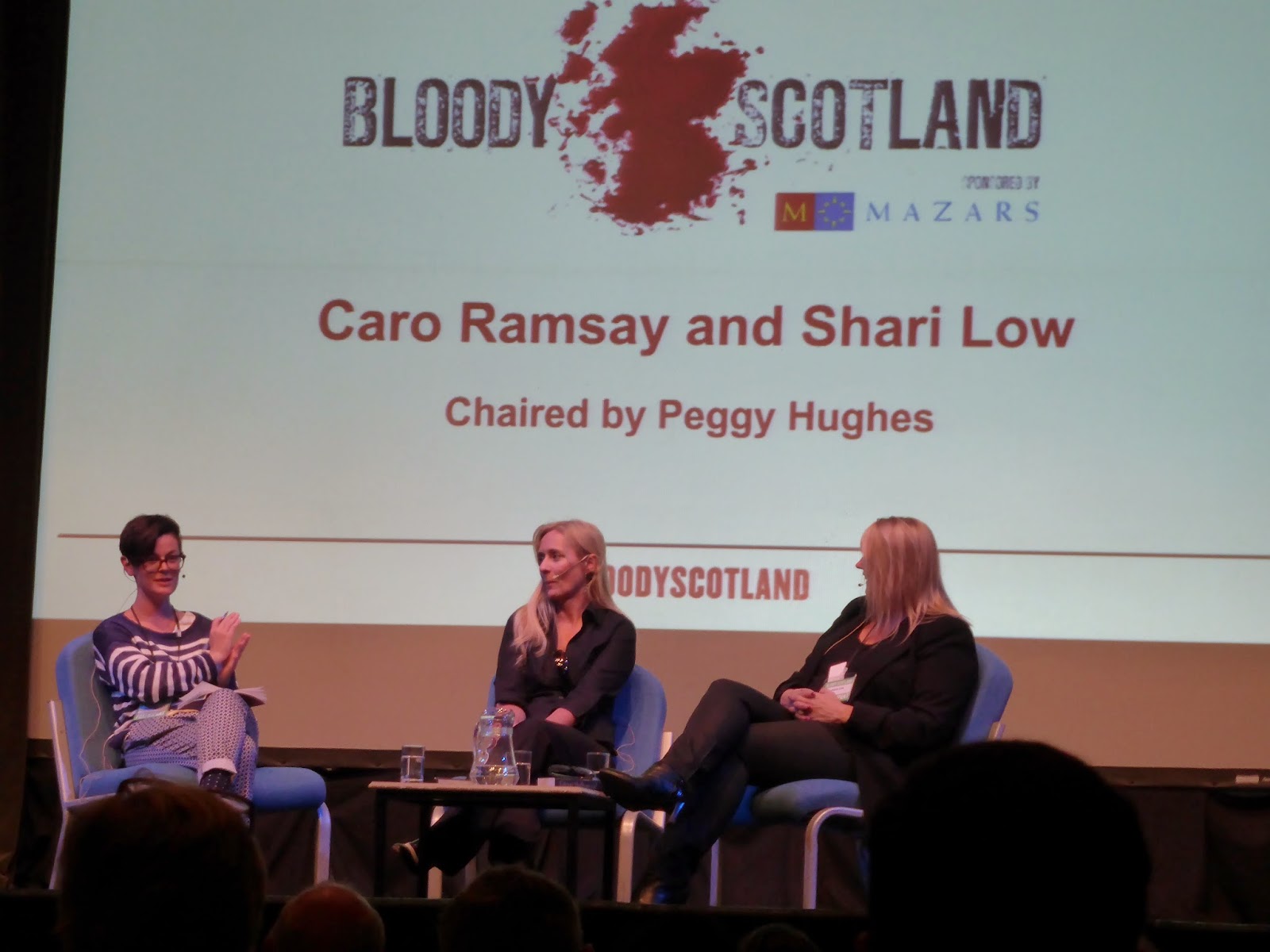 Big event with Shari, lovely girl and we had a real hoot. 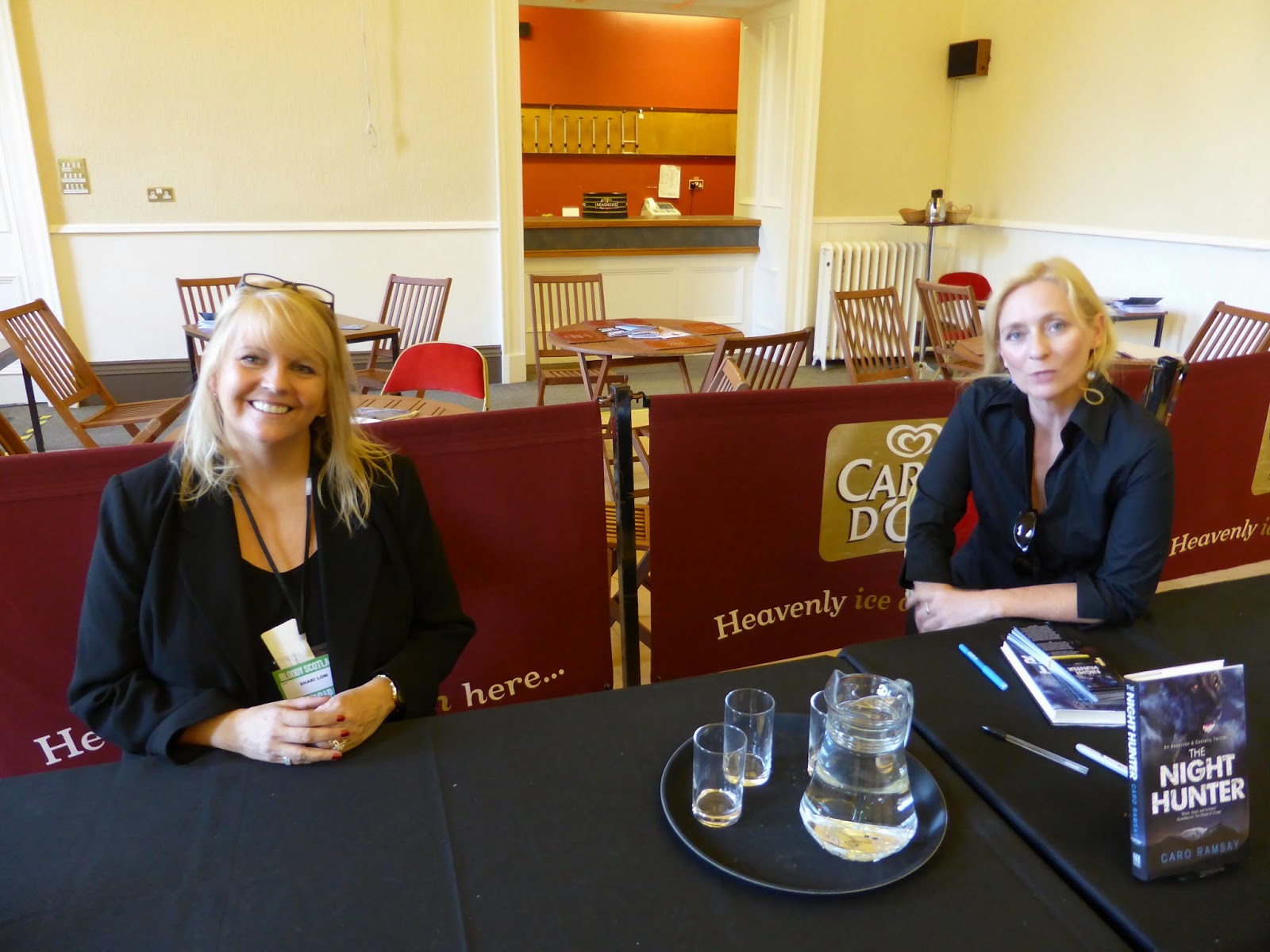 Shari and I shattered after event!!!

BBC on Wednesday. Then Wigtown on Friday.
Then I can get my trousers sorted.....

I am  not going to mention ‘IT’ again as by the time you read this blog there is probably counting still going on. Fifty per cent of the population will be dancing in the street and the other fifty per cent will be thinking if they can afford enough gas to make sticking their head in the oven worthwhile. 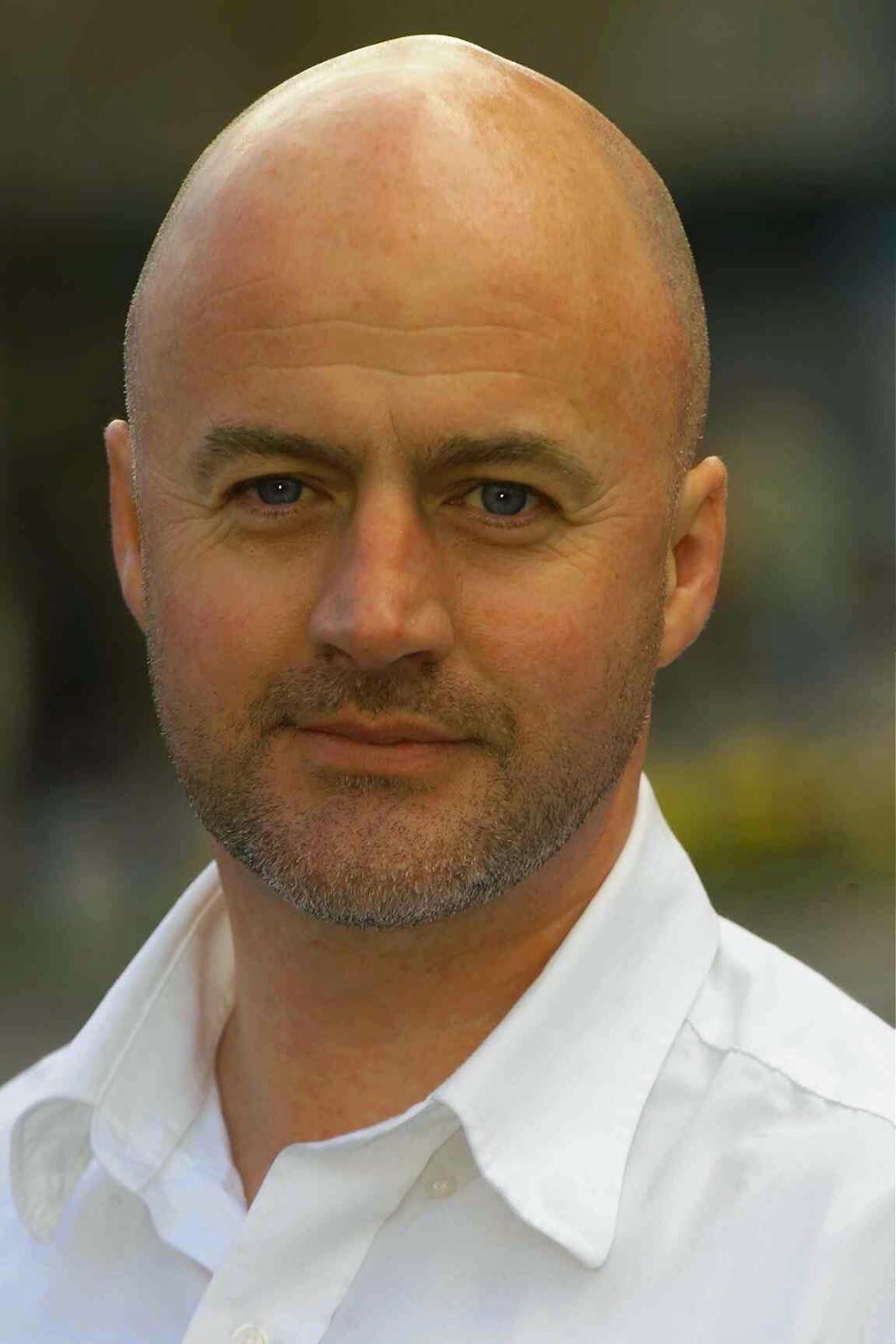 We could be looking at house prices tumbling by 40% and still nobody knows what currency we are going to use but one thing is for certain.... the Scotland v England football match at the Bloody Scotland Crime Writing Festival will have an extra bite to it! 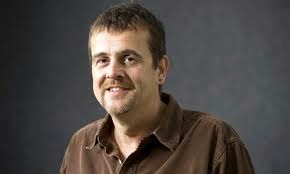 During the run up to ‘IT’ I have been accused of being unpatriotic but I will prove my patriotism in my role of ‘physio’ for the match, by having a lovely bucket of warm, scented water for the beautiful Scottish boys. And a bucket of skanky puddle water for the grumpy old gits from south of the border. I shall liberally add ice cubes and a few dead pigeons. (should not be a problem in Stirling).

This represents my therapeutic approach..

Here is a wee bit of Stirling to set the scene... 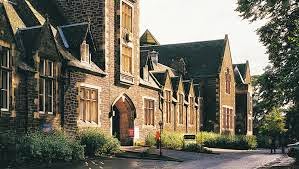 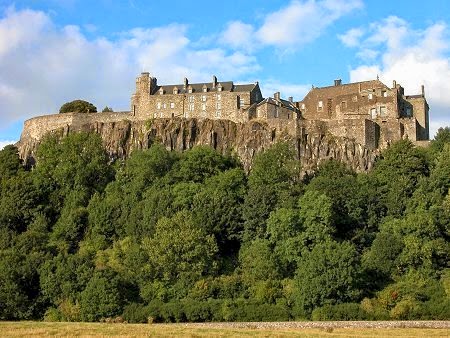 
On the serious side of things I am going to be very busy. I am pleased to say that my first event was the first event to sell out … and while that is technically true the other two factors to consider are that  a) I am on with one of Scotland’s most popular crime writers (Alex Gray)
b) and that we have the audience capacity of my broom cupboard at the event. 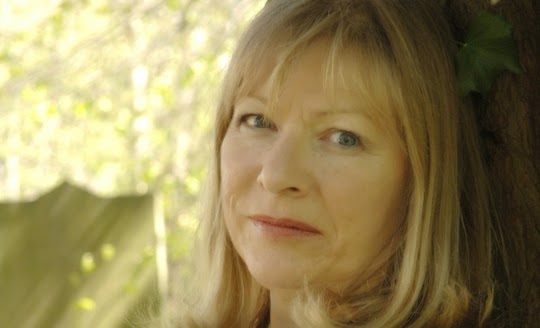 (I believe that some of the previous venues have been high jacked in case there is a re-count so we had to make do). So the event with Alex should go well.  I hope they give us time to get changed from our blood stained mock surgical scrubs outfit from the football match to my black shirt and tailored trousers for the event.

Then I am hosting a table at the dinner which is OK for me but my other half, who is about as sociable as a deep sea angler fish, will find it very traumatic and with his PhD in political philosophy, he will not talk about IT.  It will all be troublesome.  But then, if it does turn to violence, there will at least be more material for the next novel.

Early the next day I am chairing an event with two writers although one of those writers is another two, (it’s a Michael Stanley situation) so I presume that that’s a fifty /fifty, or fifty/ twenty five /twenty five time split, and not a thirty three/ thirty three / thirty three split. I have checked that the male and female personages who wrote the book jointly are not married to each other although the book is written from two first person perspectives and the couple in the book are married to each other.  If I was the woman in the book married to that man he would be dead by page three and it would have been a very short book!! I am wondering how to phrase that politely.... 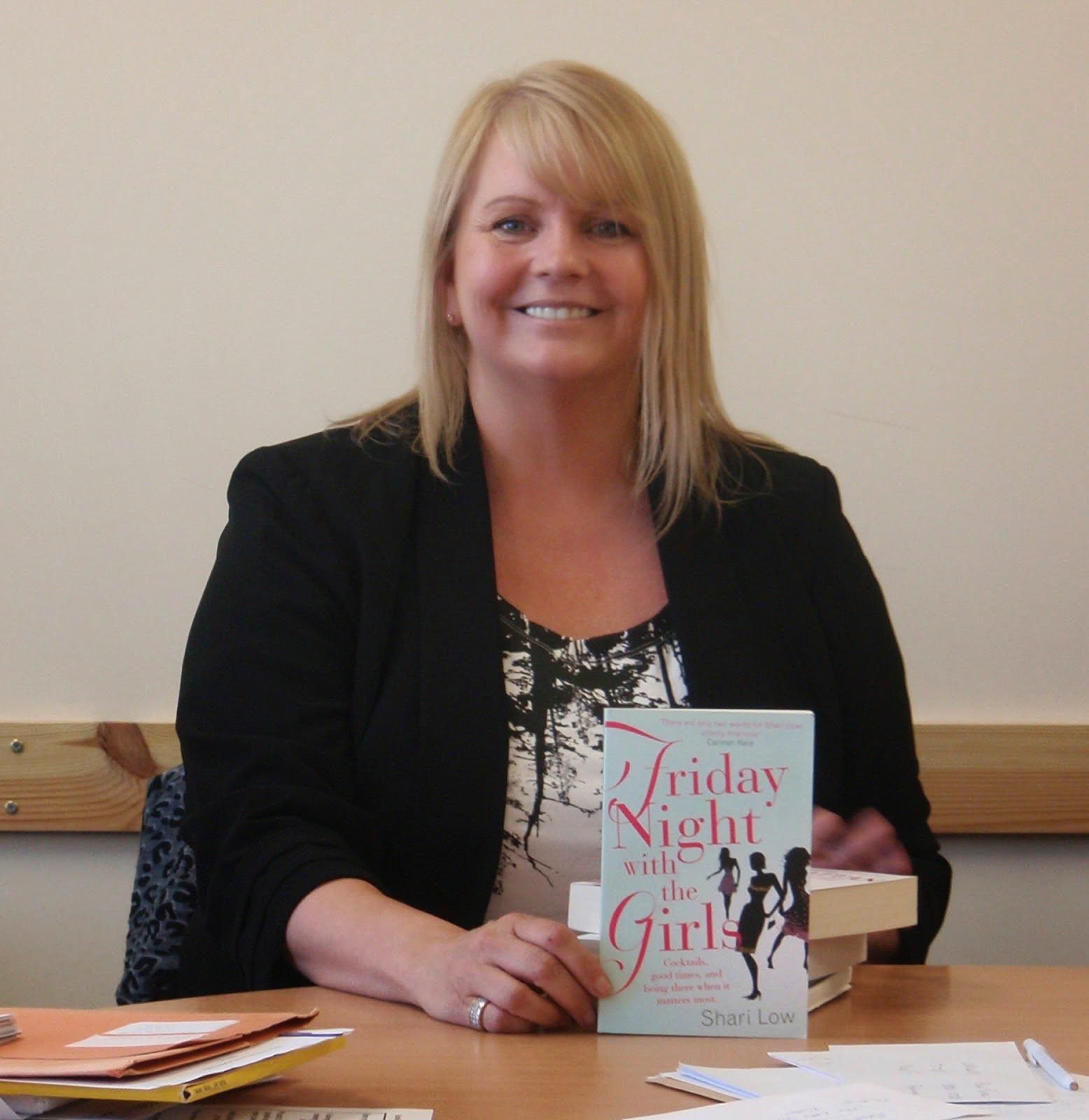 Shari Low, and below, with her co conspirator.

Later on that day I am doing another event with Shari low, in her alter ego of Shari King. She’s a very successful chick lit writer who has teamed up with her old pal – and local lad made good- the Hollywood show biz reporter for breakfast TV, Ross King. 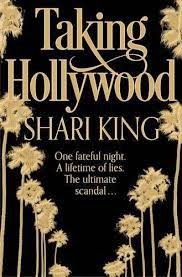 So together they have penned a Hollywood bonkbuster, where three Glaswegians go to Hollywood, leaving their terrible or not so terrible crimes behind them---- but their secret past follows. It was a very funny read… looking out for who was based on who (Gerard Butler? Ewan McGregor?)…. The amount of sex in it was exhausting, some of it was physically impossible and on one occasion downright unhygienic.

It is difficult chairing an event, lots of reading, lots of thoughtful insightful questions that I shall nick from previous panels.
I feel a Tunnocks Caramel wafer theme to the event coming on,